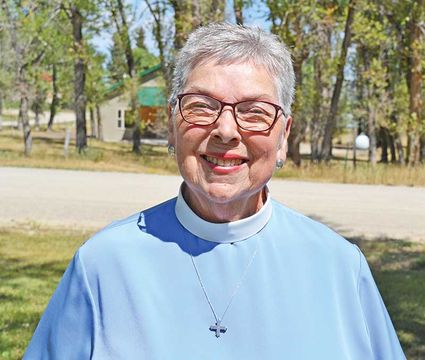 Reverend Karen Buckingham takes time for a photo during St. James' Blessing of the Animals Aug. 26

Despite trying to avoid the call to service, Rev. Karen Buckingham has been settling in to her role as Reverend of the St. James Episcopal Church in Encampment for about a year now.

Buckingham and her family moved to Rawlins in 1972 when her husband, who worked for the highway department, was transferred there from Burgess Junction, Wyo.

While in Rawlins, Buckingham, who is originally from California, went to work for the local school district as a school nurse-a position she held for 28 years.

When she retired in 2002 Buckingham thought she was going to "be home learning how to quilt" when...