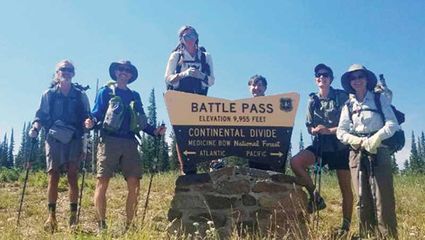 The eclectic group of CDT hikers pose with Susan Michalakes, fourth from left, at the Battle Pass Continental Divide sign.

Spanning 3,100 miles from the border of Mexico to the border of Canada, the Continental Divide Trail (CDT) is one of three long-distance hiking trails that combine what is often called the "Triple Crown" by thru-hikers. The other two trails being the Pacific Crest Trail and the Appalachian Trail. Approximately 200 people attempt to complete the hike every year, though less than half completed the over 3,000 mile trek in 2017.

The CDT makes its way through the Platte Valley with a stop in Encampment. John Farr, a resident of the area, has been an advocate for the CDT and has often been a poi...