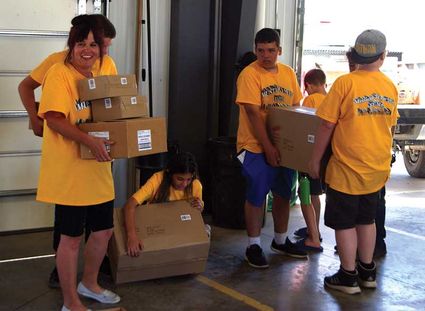 Smiles abound as the Ft. Lupton mission helps distribute food from the "Feeding the Rockies" truck at the Medicine Bow Fire Station.

The First United Methodist Church (FUMC) of Ft. Lupton had a mission team come to northern Carbon County to paint the parsonage at the Medicine Bow FUMC house from July 15-20.

In addition to painting the parish house, the mission volunteered to help with the distribution of food from the Food Bank of the Rockies that comes to Medicine Bow once a month.

The Ft. Lupton group was made up of mostly teens, although there were adults.

They were in Medicine Bow for almost a week and made an impact on the town with their volunteerism. There were 24 on the team when they arrived, but some had to leave early before the food truck came. That left a group of 17 helping with the food truck.

"Our group jumped in and got this job done quickly," Robin Anders, one of the adults from Ft. Lupton helping in the mission said. "We were also complimented on how courteous the kids were."

The help on July 15 with the food truck was appreciated by the local volunteers.

"This group was amazing," Shane Blakeman, town council member, said after the group had finished helping with the food truck. "They really helped us and they were impressive with how hard they worked."

Gwen Cerreto, the initial person from FUMC Ft. Lupton that reached out to FUMC Medicine Bow was eventually put in contact with Courtney Priest, Medicine Bow resident and member of the FUMC.

"After Pastor Gary (Wilkens) kindly invited us to come out, we started working with Courtney by email," Cerreto said. "We started coordinating what we were going to do when we came here and a list was made of what the town needed, so we came here and conquered."

Cerreto said when the group arrived on July 15, the FUMC had a service and dinner waiting. Once done with dinner, the group from Ft. Lupton went on their mission.

"That evening we started scraping, mostly because it was in the cooler air," Anders said.

The group finished painting the parish house on the evening of July 16 and had a dinner for the town.

"Thursday was sort of our free day," Anders said. "We had a history time at the museum and a treasure hunt all throughout town where we had given clues and the winner got a prize, well actually, all got little prizes."

The teenagers from the mission were unanimous in how much they enjoyed their time in Medicine Bow.

"I found it quiet and relaxing," Kassandra Osborn chimed in. "And the people were so kind about what we were doing and it really made me feel good about myself."

"It made me feel really good about helping people that appreciated what we were doing," Michelle Ruiz said.

The group acknowledged the work was challenging, but they knew the townspeople appreciated their efforts.

"Each night we would be tired, but it was a good tired," Jesus Chacon said. "The town was really hospitable; in fact one girl from our group who left earlier had gone to the store earlier in the week and found out the town had collected money for us to spend while we were here."

The group said the town was always there to help them. When the group discovered they needed extra ladders, residents quickly went to their garages and supplied them.

"Our entire team was touched by the generosity of the whole community," Anders said. "We were all blessed."

when the FUMC Ft. Lupton group discovered the profits at Liam's, an ice cream shop in Medicine Bow, went to help fund the care of Liam Scott's service dog, they made sure to purchase ice cream. 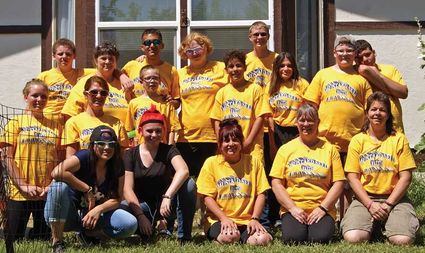 Before leaving to go back home, the First United Methodist Church of Ft. Lupton mission poses in front of the house they painted.

Cerreto said the kids learned skills while on the mission from the outdoor work and also making dinner nightly for themselves and townspeople.

"The adults on the mission got to see these kids shine and witness a major growth within themselves," Cerreto said. "Plus they met many incredible people and made a difference to a town."

"She is the one who we all look up to in helping reach our vision," Anders said. "On our mission trips, our motto is to leave a place better then when we got there. Each year we are led to a different location to make a difference."

"They really were an awesome group," Priest said. "They did such a great job with everything and it was appreciated."

The town obviously made an impression on the group as Anders parting words before heading back to Ft. Lupton, "The town was so great to us, we want to move here."