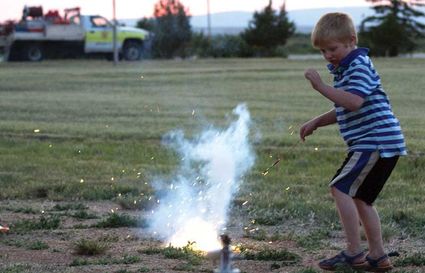 Waiting for the fireworks was half the fun for some kids.

The wind was gusty on the evening of July 4 in Medicine Bow as the dusk was closing in. It was blowing hard enough the town's fire department felt it would be wise to move the fireworks from their original set up to make sure there would be no chance of a fire from sparks being sent out past the perimeter they had deemed safe. 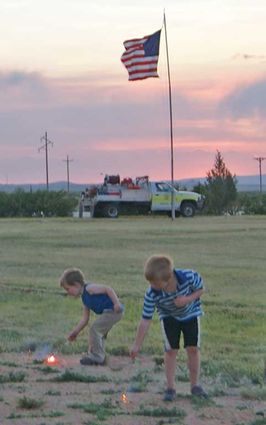 Children set off fireworks under old glory and the watchful eyes of the Medicine Bow Fire Department.

This delay saw families play with sparklers and assorted other small fireworks. The crowd waited patiently until the music started at around 10 p.m. The music played for about a minute and there was nothing in the sky. The music went dead.

The crowd was told there were technical difficulties which most attributed to the fireworks having to be moved. Twenty minutes went by and playful chanting started for the fireworks show to start. It was done in good humor and kids brought out more of their small fireworks to play with.

Around 10:30 p.m. the music started again and a blast in the sky told the crowd the 4th of July fireworks celebration had started. The crowd was happy they had waited.

Once the show was over, people headed to their cars and homes.

Kenda Colman said it best, "You have to admit for a small town, we put on a fantastic fireworks display for the fourth-and totally worth waiting for."