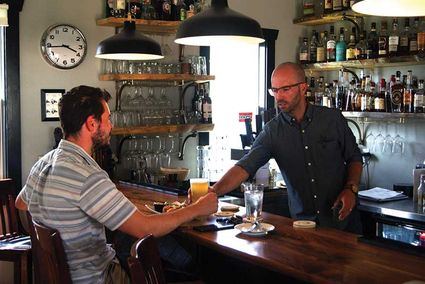 The Saratoga Town Council appointed Danny Burau to replace Kim Hytrek for their representative to the Carbon County Visitors Council (CCVC) on June 19. Hytrek had reached her term limit of six years.

Burau, the owner of Firewater Public House, is excited about the appointment.

"The beauty of this whole Valley and Carbon County as a whole, it is still, for lack of a better term, a well-kept secret," Burau said. "We have one of the major lifelines far as a highway goes and given the volume of traffic day-to-day, a lot of people don't know what they are missing when they drive through Carbon County."

He said there is access to many activities throughout the county whether it is floating, hunting, fishing, hiking or just relaxing.

Burau said the Front Range is the target for visitors, although he said his experience while living in Boulder was that many Texans and Californians looking for the perfect Western experience came to Colorado.

Burau thinks the Coloradans who have several generations of being native are finding the influx of population from other states hard to deal with. He thinks these natives look to Wyoming as a place to escape and a place like Carbon County is ideal for them.

He said Carbon County is a place that true outdoor enthusiasts can come to and get an experience that has been lost in Colorado for the most part.

"There is so much to take advantage of around here and Colorado is still just learning about us," Burau said. "Saratoga is a well-known secret and the other parts of Carbon County are a secret-secret."

What he finds incredible is how pristine the county is.

"This is difficult to find anywhere," Burau said. "A lot of it is because people are passionate and proud of being from Wyoming. More than any place I have ever been."

He said there is love and respect in the state for what it offers by the natives.

"It takes a special person to live in this state and they really care about it," Burau said. "I haven't felt that in other places I have been."

He said when he started his business in Saratoga, he wanted the locals to be happy with what he was doing.

"It was a huge priority, not because of the money," Burau said. "I want them to like what I am doing and feel like I am paying respect to their state and their town."

He said he has been inspired by businesses such as the Hotel Wolf, the Virginian, and Bella's.

"There is so much passion and love for their communities by businesses in Carbon County that they want to do it to their best level they possibly can constantly," Burau said. "When I came here, I really wanted people to know I respected the community and that is difficult to put forth sometimes as an outsider."

This is a reason he is extremely flattered to be picked to represent Saratoga at the CCVC. He said as a person who started out from another state and fell in love with his new home, gives him insight to what outsiders look for when visiting a new place.

"This county is majestic and I don't think people even as close as Laramie know what a treasure this place is," Burau said. "I hope with my position and working with the other board members of CCVC, I can help let more visitors know what I know about this place being the gem that it is."