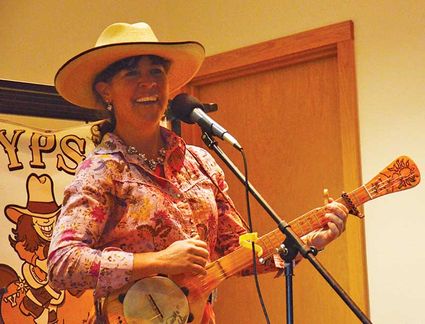 The Gypsy Cowbell belts out a song on Friday afternoon.

The meeting room of the Saratoga Branch Library was filled with raucous rhythms of homespun musical instruments on Friday, June 22, as children played along with the self-styled Gypsy Cowbelle. The event, which was scheduled as part of the "Libraries Rock" summer reading program, started at 1 p.m. and quickly filled with youngsters and their parents. Spoons, a washtub bass, a handsaw and more were used in a hectic harmony as "V," as she is known, led the band of merry music makers with classic western songs.

V, or Ruby Bell, began touring with the "homespun instruments" program about 10 years ago. She has lived in Wyoming since 1995, living just outside Pinedale, and moved to Thermopolis in 2011.

"I've been touring with this program for about 10 years, but I've been playing concerts and other venues for about 25 years all told. I made a conscious decision to do this as a career 10 years ago," said Bell. 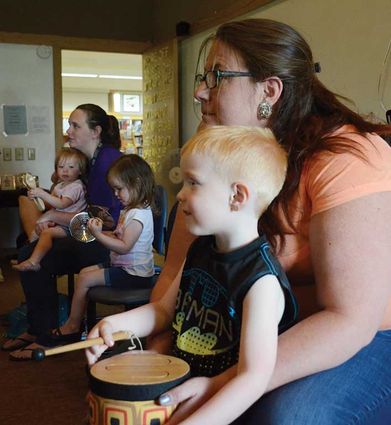 Saratoga Library Assistant Telitha Bergeson and son, Jareth Wood, get in on the music.

The idea for the homespun instruments began in 1997 when she designed her first "plank" banjo in pursuit of a lightweight instrument for travel. Since then, according to her brochure, she has designed more than 40 banjos and improved the design as she goes along. Bell played one of these plank banjos during her visit to the Saratoga Library. According to Bell, these programs are not only fun, but exciting.

"Oh, it's fun!" Bell said. "The main thing is seeing people participate and then when you see the creative ways they are using instruments."

During breaks between the music, Bell would show some of the kids how the instruments were normally played, but the children would then play their own way. According to Bell, the program gives parents ideas on instruments they can make at home for their kids to continue playing music. This falls in line with Bell's selling point of "nothing fancy, but guaranteed authentic."

For more information on the Gypsy Cowbelle, go to www.gypsycowbelle.com.