All three involved in June 4 head on collision survive 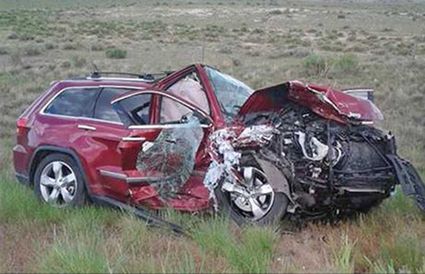 the two vehicles involved in the wreck.

Life can change in an instant, a fact that people can sometimes forget. Such was the case with Encampment resident Kassidy Barr as she was headed to the movies with her friend, Ember Yeary, on the evening of June 4.

The Saratoga Sun reached out to Barr following the crash. Barr granted permission to the Sun to use her Facebook post and photos in filing this report.

"When we woke up Ember said she felt like she got ran over by 32 Spanish bulls and I said I felt like I got hit by truck. Both are probably pretty reasonable," wrote Barr in a post on her Facebook page. "Forever thankful for that...