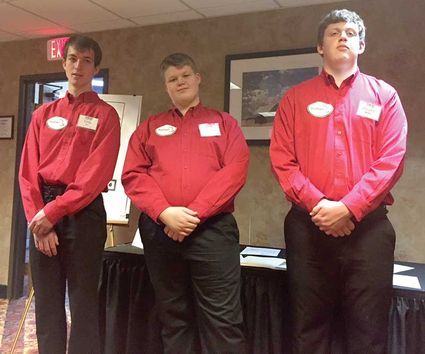 Members of the Encampment chapter of Family, Career and Community Leaders of America (FCCLA) traveled to Cheyenne in March to participate in the annual State Leadership Convention and Competitions. The 2018 convention theme was "Peaks of Potential – Rise, Lead, Succeed" and, with Encampment High School sending 23 members to the competition, they did just that. Encampment ProStart students also headed up to Casper in March to compete in the State ProStart competition.

Ryley Henrie received a gold medal for her cake decorating at the 2018 State FCCLA competition, Paige Powell also took home a gold medal for job interviews where she interviewed for a position as a summer camp counselor.

Riley Hopkins received a four star rating in baking for his carrot cookies as did Shiann Finney for her recycled wool bag and Kalub German for his buffalo hair on leather shell pouch in textile arts.

A week before the FCCLA competition in Cheyenne, four ProStart students traveled to Casper to compete. Three students composed the Encampment Management Team and one student competed in baking and cake decorating. 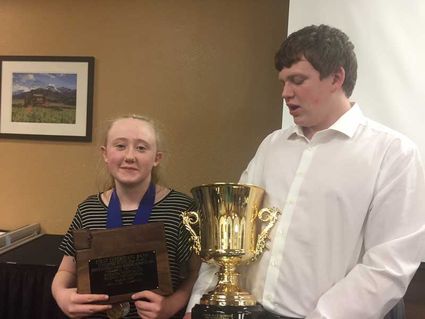 Ryley Henrie and Charles Watts pose with their trophies.

The Encampment Management Team, composed of Cody Cor, Colter Cor and Charles Watts, finished fourth and received a three star rating for their "Crusin' Cafe" food truck. Cody and Colter Cor and Watts developed a comprehensive menu for the competition starting with appetizers and salads and ending with dessert.

Meanwhile, Ryley Henrie returned to Encampment as the champion bread and artisan bread baker. Henrie also placed second in cake decorating, thanks in part to her mentor, Sue Hooker.

FCCLA members and Pro-Start students alike are taught by Cheryl Munroe, who has taught at Encampment Schools for several years.