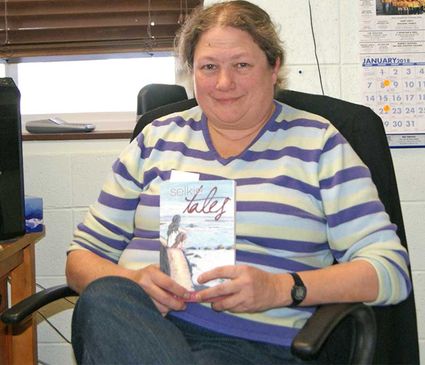 Karen Heath is the town clerk of Medicine Bow. She is also an author of five books featuring Selkies that make their home in Maine.

A Selkie is a legendary creature originating in Irish folklore and Orkney Islands that are said to live as seals in the sea, but shed their skin to become human on land. Stories frequently revolve around female Selkies being forced into relationships with humans by someone stealing and hiding their sealskin, sometimes not regaining the skin until years later when they commonly return to the sea, leaving their human family.

Heath's heroine is Annie Shaw, a high school champion swimmer raised in Maine, but not near the sea. When she does get near the ocean, specifically a place called Shelmerton Cove, Shaw discovers she has another supernatural family.

Heath has been interested in Irish legends since she found out she was Irish through a DNA test. As she learned more about the legend, she was encouraged by friends to write a story. She did, and that story eventually became chapter four in her first book, "Selkie Tales."

After she wrote that story, Heath decided to give her heroine a background and the early chapters came into being.

"There had to be a back story, so I found myself writing the book out of order, sort of like a movie," Heath said. "The next books in the series, I was more disciplined and wrote outlines."

She can trace her interest in the Selkie legend back when she saw the 1995 movie "The Secret of Roan Inish." The summary of the tale is a young Irish girl who goes to live with her grandparents on the west coast of Ireland and hears stories about her ancestors, tales that involve mythical creatures called Selkies who can shift from seal to human form. After the girl ends up on the small island of Roan Inish, her family's ancestral home, she believes she may have found her little brother living by the sea.

"I watched it with my child and I thought the story was pretty cool," Heath said. "And I set the idea aside until I was ready to write."

She said her genre is considered fantasy crossover, which is geared to young adults because it has elements of coming of age along with adult themes.

Heath got her first book published in 2011. She got help from Donald Bills, her step-father-in-law, a retired professor from the University of Oregon, who encouraged her to self publish. He believed in her work and financed the first book.

Heath had another retired professor, James Hamilton, who helped her with her story line and characterizations.

"After he would read some of my work, he would make suggestions that would put me back on track if I went astray," Heath said. "He knew my characters so well, he would even tell me, 'Annie wouldn't do that' and I would realize he was right."

The professors who went over her work were not the only important persons who gave her insight to writing and publishing her books.

"Another thing that helped me a lot, was going to Wyoming Writers conferences," Heath said. "They gave me character sheet to fill out on my main character and it made her more real."

Heath said the Wyoming Writers Organization should be utilized by every writer in Wyoming.

"I am mentioning them because they are a great resource," Heath said. "They put you in direct source with agents, talk to other writers and get valuable advice from their entire network."

She said she has been completing one book every year since 2011, although she took some time off to mourn her mother's passing.

"It takes a lot of discipline to get the books done," Heath said. "I am more of a sporadic writer instead of someone who writes every day."

Heath initially was hesitant to even consider self publishing because she felt it would be vanity publishing.

"All my life, I have been raised to think that publishing yourself is vanity publishing and you shouldn't do it," Heath said. "That is not true any more. Indie publishing and self publishing is the way to go nowadays."

She did pitch it to agents and said there was no interest.

"Without an agent you can't even get to a publisher," Heath said. "Wyoming writers organization opened my eyes that self publishing was the way to go."

She found a self publisher in Canada, Art Bookbindery, that offered her what she was looking for.

She designed the cover, so she owns the rights to it in addition to the rights of the content. She said this is very important.

"That means nobody can change it but you," Heath said. "Big publishers own it and they can change anything."

Heath said the distributors of books are important versus who is the publisher.

Heath said she went to different bookstores showing her book. She had mixed results on what stores took on the book.

"I miss Hastings in Laramie," Heath said. "That store was so open to authors and allowing signings. I can't say enough good about them."

Heath said if a reader enjoys the first book, Selkie Tales, chances are the other books will be enjoyed also.

"People ask which is my favorite and I don't have one favorite exactly, but I think the first, third and fifth books, could be considered my front runners." Heath said.

She does have advice to any author: "One book that is essential to a writer is Strunk and Whites', "Elements of Style", Heath said. "You can't do without it."

Selkie Tales and the other four books can be purchased on Amazon.