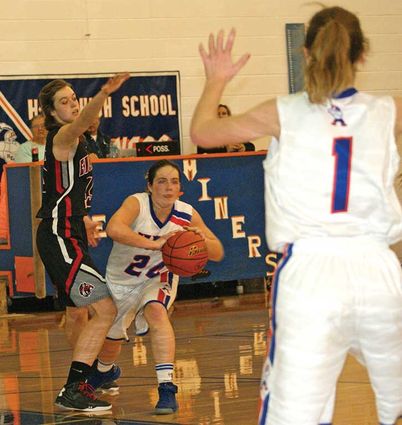 Given that three of the Lady Miner starters are in ninth grade and has only one senior, the teams are well matched on a good day. Unfortunately, it was not a good day for HEM. The Lady Miners came up short with Cheyenne East winning 49-36.

"When we go into these type of games, whether it is Rawlins, Wheatland, Laramie or Cheyenne East, you are never quite sure what type team you are going to get," Jones said. "Honestly, I believe that is a benefit to us, because my team just has to play basketball with unfamiliar faces."

Jones said against Cheyenne East, the Lady Miners couldn't get control of the game.

"We were able to put points on the board, but we don't usually let people score on us like that, but it happened," Jones said.

The Lady Miners didn't have time to lick their wounds on the loss to Cheyenne East, because they faced Encampment on Friday.

"We knew coming in,how talented Encampment was coming in as a team on a whole," Jones said. "They have quite the post presence and great shooters from the outside."

In the first quarter, the Lady Miners were very much in the game . With 1:02 left in the half, the score was 9-9. The home crowd was wondering if they were watching the makings of a major upset.

It was not to be.

"We had our work cut out for us, but saying that, I think the effort the Miners showed was tremendous today," Jones said. "In particular, I look at Morgan Kenneda in the middle of that zone with a couple of all-state players and scored against them. They say hard work goes a long ways–and Morgan epitomizes this."

Kenneda was the leading scorer against the Tigers with 10 points.

"I felt that Taylor Scott stepped up her game tonight and showed what a truly special player she can be," Jones said. "She chose to drive to the bucket and her finishing some of those drives will come with confidence and more experience."

"I think as a collective group, all eight girls, they went into the game with effort from every single one of them,” Jones said. “Obviously with a lopsided score, it doesn’t always tell what really happened on the court.”

Taylar Scott scored 8 points, with 5 rebounds and Campbell had 5 points and 9 rebounds.

Jones said before the game, she had been approached by well-meaning supporters asking what she was going to have the team do against the Lady Tigers. She knew the Lady Miners were going to have a tough time, but she didn’t want her team to feel overwhelmed just getting on the court with Encampment. The questions from the fans made her realize she had to get her team over the fear of being beaten by Encampment.

“We talked before the game and I told them to go out and enjoy the game and play like you have nothing to lose,” Jones said. “I felt (with) their effort on the court, they did just that.”

Jones was not upset at all about the loss to Encampment.

“My freshman starters were guarded by all state players and they just kept playing,” Jones said. “I told them: ‘This was the best practice, I could give you.’”

Jones was surprised how many compliments came from Encampment supporters.

“After the game, some people from Encampment came up to me and told me how impressed they were with my girls for never giving up and that the score didn’t reflect that,” Jones said. “When I heard those comments, I was so proud.”