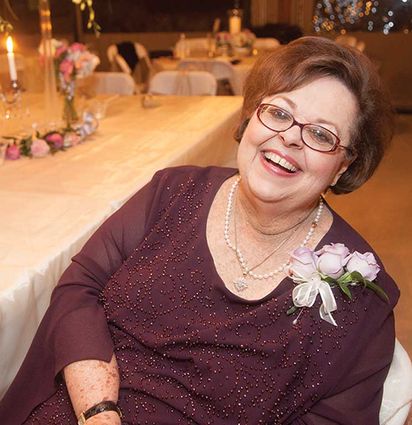 A memorial service for noted historian and author, Gay Day Alcorn Clark, 73, is scheduled for 1 p.m. Friday, Dec. 15, 2017 at the First Presbyterian Church of Saratoga located at the corner of Bridge and Third streets. Officiating will be the Rev. Steven Niccolls with Teense Willford presenting special music.

Immediately following the service, family and friends are invited to a reception at the Day home at 806 Cliff Drive on the south bench in Saratoga.

Carbon County native Gay passed away peacefully at her home Thursday, Dec. 7. While it was completely unexpected, it was exactly how she wanted it, one minute here, the next in heaven.

Gay Elizabeth Day was born in Rawlins Dec. 15, 1943, to Kenneth and Elizabeth (Hewitt) Day, and grew up on the Day Ranch located at the junction of Highway 130/230 between Saratoga and Encampment. Although an only child, she was raised with two cousins-Bob and Henry Hewitt-who were like brothers, both of whom survive her.

She attended Saratoga schools, graduating with the class of 1962 after which she attended the University of Wyoming. While at UW she worked in a flower shop and developed a passion for floral arrangements and party planning, a trait she possessed throughout her life. She also enjoyed needlepoint, reading history and the Bible, travelling, entertaining, visiting, researching history and sharing her stories with friends.

Following a short stint as a writer at the "Coloradoan" in Fort Collins, she returned to the Day Ranch and taught briefly at the Encampment Elementary School as well as Sunday School teaching at the Saratoga Presbyterian Church.

W. B. (Butch) Alcorn and Gay were married in Encampment in January of 1972. Butch was an airline pilot and his job took the couple to Dallas, Texas, and Key Biscayne, Fla. where their daughter, Libbi, was born Dec. 31, 1973. Gay would accompany Butch on flights all over the world. The family moved back to the Valley in 1975 when Butch was transferred to the Denver hub. She and Butch were divorced in 1986.

For the rest of her life Gay made Saratoga her home. She married Richard Clark in Saratoga on May 30, 1996. Their travels took them to the East Coast where she continued her research. She was also pleased to take a cruise to Alaska.

After graduating from the University of Wyoming in 1971 with a B.A. in education and a minor in music, Gay followed her lifetime interest in local, Wyoming and U.S. history. It all began when she was a little girl, visiting with her grandmother and great-aunts Cora and Ida who talked to her by the hour about their neighbors and told her stories that they had heard from their father George Washington Drinkard, a newspaper columnist.

Gay is the author of many articles about the Upper North Platte River Valley and she is best known for her book Tough Country, The History of the Saratoga & Encampment Valley 1825-1895, which is considered the bible of local history. After numerous printings it is now out of print and considered a collector's item. Rare copies may be found on AbeBooks.com for a steep price.

The desire to discover and preserve the early history of Wyoming led her throughout the U.S., Scotland, England, and Mexico. As Gay liked to say, searching for documents took her literally from cabins to castles.

The English-Speaking Union's New York City judges chose Tough Country in 1985 for the history section of their "Books Across the Sea" program, calling it "a great work on the American West experience."

When she received the Homsher award from the Wyoming State Historical Society in 1997, they acknowledged her outstanding efforts saying that because of people like Alcorn, "Wyoming's unique heritage is saved."

Other publications by Gay include, "Dear Children": The Letters, History and Family of George Washington Drinkard (2001), and "Saratoga's Historic Hood House" (1987), plus hundreds of obituaries, magazine and newspaper feature articles and history booklets. She also joined with several other area authors writing, editing and publishing the history of Saratoga and Encampment area pioneers in the Saratoga Museum publication, An Album of Family Histories"(1990). She was instrumental in helping write the centennial history of Saratoga in 1984 as well as promoting the celebration through presentation of a style show.

Through sponsorship of the Wyoming State Historical Society and Wyoming State Archives, Gay spoke on numerous Wyoming historical topics over the years for groups as far ranging as a Chautauqua, various historical societies, local school children, church groups, and the Wyoming Game and Fish Commission. She was a featured speaker for a regional National Society, Daughters of the American Revolution event.

At the time of her death she was writing the final chapters of her latest pictorial/history book featuring pioneer women of the Saratoga and Encampment Valley. She recently told friends and contributors she hoped to have the book finished by Christmas. The family plans to complete the book for publication.

Gay was a charter member and served on the board of directors of the Saratoga Historical & Cultural Association, which established the Saratoga Museum. She was a member of the National Society, Daughters of the American Revolution; Saratoga and Encampment Presbyterian Churches, and Grand Encampment Museum.

Above all of her loves was her relationship with Jesus Christ. She would often quote her father who told her, "The most important decision you can make in your life is the one to make Jesus Christ your Lord and Savior."

She was preceded in death by her parents and aunts and uncles, Joseph and Polly Hewitt and Quinton and Muriel Hewitt.

Friday, Dec. 8, she was buried next to her mother and father at the Day family plot in the Saratoga Cemetery.

The family noted, "Many of you will want to give to the memorial fund at the church and she would like that very much. If you prefer to send flowers, that would also be appreciated."