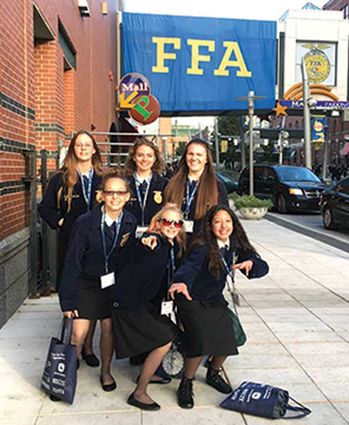 T'lysa Solaas, a member of the Bow River chapter of Future Farmers of America (FFA) came in 8th in the Environmental/Natural Resources Systems category in the Division 1 of this year's FFA National competition.

The annual National FFA Convention and Expo was held in Indianapolis Oct. 25-28. To qualify, FFA members, working as individuals or teams in grades seven through 12, are required to conduct a scientific research project pertaining to agriculture or food science industries and win their state's FFA Agriscience Fair.

The Bow River FFA students who participated in the National FFA Convention and Expo joined over 67,000 other high school students from around the nation to take part in leadership sessions and workshops, career development competitions, and to explore the career expo that featured hundreds of college and corporate networking booths

Unfortunately, the team of Taylar Scott and Madison Campbell, who qualified with their project on plant fertilizer applications in the Plant Systems category, elected not to go to Indianapolis because they are both starters on the Hanna, Elk Mountain, Medicine Bow (HEM) High School volleyball team that was bound for state competition.

In the Animal Systems category Joanna Niemark and CharlaMaee Widdison came in 12th with their project examining bacteria in dog saliva.

The Bow River members were extremely happy to have placed so high in the nationals.

Solaas said she was proud of the chapter and Neimark said having the success made her want to do it again.

"It was cool because we were able to see that it doesn't matter that you come from a small school-you can still accomplish big things," Solaas said.

"It was fun to compete because this was our first year and we made it all the way to the national level," said Neimark.

"It is really special to have our kids from our small school qualify to compete at the national level," said Lindsey Freeman, Bow River FFA advisor.

"Many schools who compete in the National Agriscience Fair have thousands of students in their school and four or five agriculture instructors."

Freeman said some schools are Science, Technology, Engineering and Mathematics (STEM) academies and focus all of their time on science fair.

"For our students to be competitive against schools with far more resources is commendable, especially when you consider our students' additional success in academic and athletic pursuits," Freeman said. 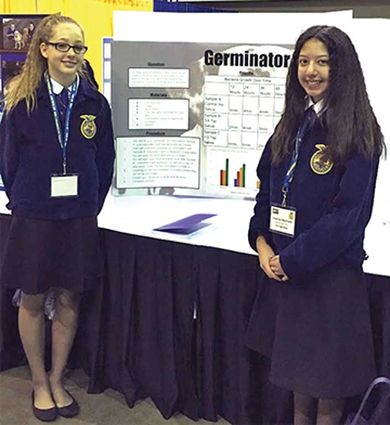 The attending competitors took away different memories from going to the convention. Solaas said, "I really enjoyed seeing new things like the Indy 500 race track and the convention."

"My favorite part was presenting our project and competing in the National Agriscience Fair," Widdison said.

"I really liked getting to hang out with our group and making memories," Neimark said.

For next year, Freeman is optimistic for the future national expo.

"We were all able to learn more about what it takes to win and we have a top three finish in our sights for next year."