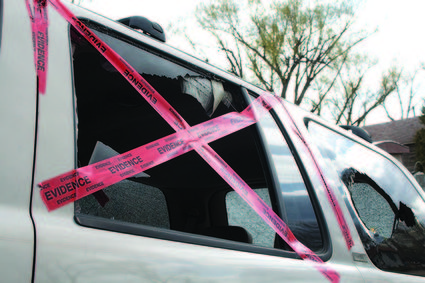 Over the weekend a business was burglarized and a car stolen and severely damaged. According to the business owner, the car might have been destroyed in act of vigilante justice, only the thieves stole the wrong car.

"We came in from lunch with our Church family and the Saratoga police called to ask if we had a car stolen off our lot," said Gene McDowell, owner of McDowell's Towing in Saratoga. "I said I didn't think so but I went and checked-and it was missing."

Sometime over the weekend, a person or persons entered McDowell's fenced and locked yard on North State Street near Chatterton Drive and stole the vehicle-a silver 2000 Dodge Durango SUV-which was found later near Sandy Beach just outside Saratoga.

The vehicle had windows smashed out and had been shot numerous times.

According to police scanner traffic, the vehicle was found just outside the town limits of Saratoga, so the Carbon County Sheriff's Office was called in.

The vehicle was stolen in Saratoga, however.

McDowell, a tow truck operator based in Saratoga, was called in to recover the vehicle and tow it to the town's vehicle storage yard on River Street, he said. At the town's lot, the vehicle was inspected for forensic evidence.

Chief of Saratoga Police Department Robert Bifano said lots of forensic evidence had been left behind, including spent bullets that were recovered from the vehicle. Investigators had not yet decided whether to send the collected evidence to a crime lab for analysis.

The investigating officer, Bifano said, had developed a suspect or suspects in the crime, but would not give any details as the case is still under investigation.

According to Bifano, there is the possibility of several felony charges being brought against suspects should they be arrested. Burglary, defined as forcibly entering any locked or secured property, building, dwelling or vehicle becomes a felony as soon as any property is stolen, Bifano said.

According to McDowell, the vehicle belongs to a customer from Cheyenne and was in the yard awaiting a transmission replacement. "We were just waiting for a used transmission to come in from Wamsutter and it would have been done."

McDowell said he believed the crime was an act of retribution against a former employee, only the "vigilantes" stole the wrong vehicle. The person McDowell believes the thieves were targeting drives a similar silver Dodge Durango."It's a case of mistaken identity," he said. 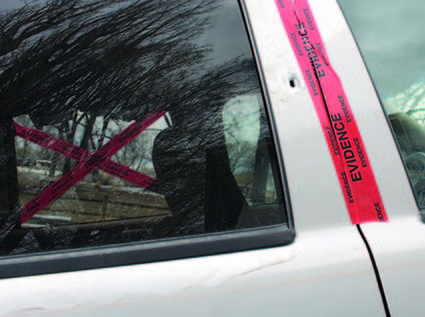 "I have to compensate my customer," McDowell said.

McDowell said he plans to seek compensation for his losses from the perpetrators when they are arrested. Under Federal and state law, most victims of crimes are entitled to compensation for economic losses due to crime.