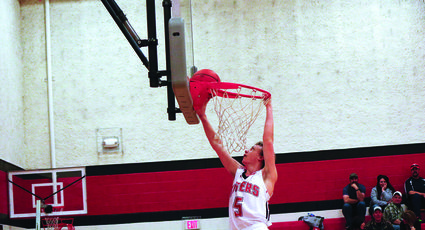 The Encampment Boys' Basketball team had a rough weekend facing off against two conference rivals, one of which was ranked #5 in the class.

Encampment's record is now 1-5 for the conference, and 9-8 overall.

Illnesses that swept through area schools were likely a factor in the game's outcome. According to figures from the school district, the absentee rate at Encampment Monday due to illness was 24 students.

The Tigers are also a very young team.

"Wyatt Cox had a double-double in both games," Tigers' head coach Jake Johnston said. "And, I thought Reid (Schroeder) played well against Cokeville."

Johnston was forthcoming about some of the issues plaguing the boys' team that would need to be rectified going forth. "Against Farson we shot 38 percent from the floor and had 18 missed layups," he said. "Those really hurt us."

Johnston added that the team shot 20 fewer free throws in the game against Farson-Eden because of players "reaching and not moving (their) feet."

"The last two games were games that showed us what we need to improve," Johnston said. The team, he said, shot 35 percent of its shots from the floor and missed 15 layups during the game against Cokeville. "We need to work on moving our feet on defense and finishing our layups."

With regional play starting Feb. 23 and State finals looming March 2-4, the Tigers have three more games to go. Friday, they host Little Snake River before traveling Saturday to face Cheyenne South. The team's final game of the regular season is against Saratoga 5 p.m. Feb. 18 on the Panthers' home court.