By Dick Perue
Special to the Saratoga Sun 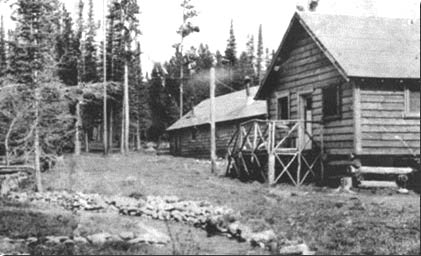 Dozens of photos-including this barracks, creek and grounds-along with personal accounts and history of an Italian/German WWII POW camp near Ryan Park will be featured Feb. 16, at 7 p.m. in the Saratoga Branch Library.

Enrichment programs at the Saratoga Branch Library were developed Jan. 23 during the quarterly meeting of Friends of the Saratoga Library (FOL). At this session, members established February and March's program calendar and set the date for the Spring book sale.

Local historian Dick Perue was invited to relate the history of a World War II prisoner of war camp near Ryan Park. His pictorial presentation is scheduled for Thursday, Feb. 16, at 7 p.m. in the Saratoga Branch Library.

Upcoming FOL events at the local library include:

Feb. 16 at 7 p.m., "Pictorial history of WW II POW Camp at Ryan Park" by Dick Perue. This talk features a video and booklet with photographs, personal accounts, and history of this little-known prisoner of war camp in the Snowy Range which housed Italian and German POWs from 1943 to 1945.

All presentations are free and open to the public and will be held at the Saratoga Library at 503 West Elm Ave.

The Spring FOL Book Sale is scheduled for April 22 through 28 where books are sold by donation only. A similar book sale will also be held in the Fall.

The current big project of FOL is a seed library that allows community members to visit the library and get plant seeds for their needs. The volunteer organization is working with members from the Community Garden to build interest in the seed library and get their expertise on seeds to purchase. New seeds will be purchased soon and available from the library in time for spring planting.

The purpose of "Friends of the Saratoga Library" is to focus public attention on the library and its services; to stimulate interest and promote the use of the library's resources; to sponsor cultural and related programs that are of interest to the community; to encourage gifts, endowments and memorials to the library. FOL helps sponsor speakers and activities for adults and children, donates items to the library (books, CDs, movies, tables, games), and holds book sales to raise funds.