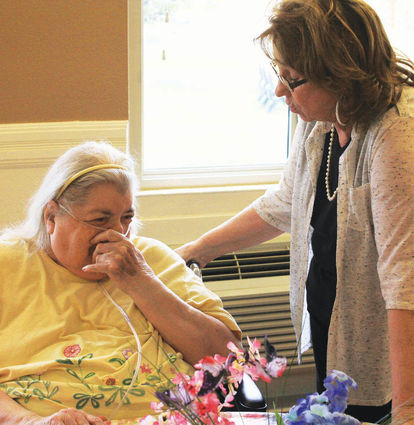 Charlotte Gibbons, sobs as Omie Blocker comforts her Monday evening after the announcement that Deseret Health & Rehab may be closing.

Both the Saratoga and Rock Springs facilities, as well as several others across Kansas, Minnesota, Nebraska and Utah are owned by the Deseret Health Group, which according to bloomberg.com was founded in 2006 by Jon H. Robertson and is chiefly operated by his two sons Garett Robertson, the Chief Executive Officer (CEO) and Skyler Robertson who serves as Chief Operating Officer (COO).

Mills says she attempted without success to get in contact the corporate offices over the weekend before she took matters into her own hands and began reaching out to local and state community members and officials for help. "The corporate offices have pretty much left us on our own to deal with this," a frustrated Mills said in a lengthy interview Saturday when she met with the Saratoga Sun to explain the alarming development. "My primary concern is that these people are being taken care of and that one way or another we don't have to close the facility which would mean our residents, many of whom are from this community, would have to leave."

Mills says she next contacted Ron Pearson in the Licensing and Survey division of the Wyoming Department of Health (WDH) and, according to Mills, was told by Pearson that, "Garett and Skyler had given the WDH a verbal, but not official notification that they would be closing the facility within 30 days."

Late Friday afternoon Mills reached out to Wyoming House District No. 26 Representative Elaine Harvey, who is the Republican co-chairperson of the Labor, Health, and Social Services committee. Harvey told the Saratoga Sun in a phone interview that, "as of mid-afternoon Monday the state has been given official notice of the Rock Springs facility closing but has not received an official notice for the Saratoga facility closure." Harvey went on to confirm that, "the CEO for Deseret has assured the state that they will meet the federal and state requirements for closing their facility."

Emergency Management Coordinator, John Zieger stopped by with five gallons of milk after he became aware of the developing situation at the center this weekend. "We're in contact with the staff there and have let them know to notify us about any assistance that we can provide them regarding (the residents) basic needs," said Zeiger.

Mills sat down with Saratoga Mayor Ed Glode along with Deseret Business Office Manager Omie Blocker and Zeiger to discuss S. Robertson's directive to Mills to get in touch with the town of Saratoga and the mayor to work with them to seek help with financial alternatives to keep the center open.

Glode's concern with the plan for the town to take over the facility was that it could take over a year to set up a non-profit community-owned operation and to separate the business from the property. "I don't think Skyler is thinking clearly on this one," Glode said of the Deseret COO's hopes for the town to step in financially.

Glode went on to express that, "as an entity we obviously don't want to lose this asset in our town, but for it to become a department of the town isn't likely." Glode explained to Mills that he felt that solution was more likely to come from the county or state level but reminded her that by then, "the war would be won or lost already before that could take place."

Glode discussed several options that Mills could pursue with community members and organizations and added he had been in contact with Tonya Bartholomew and Dr. Dean Bartholomew about services they could provide or recommend to help the residents and staff.

According to Mills, the Robertsons are reportedly asking for $17,000 a month to lease the building, or for a buyout in the amount of $1.5 million. During the meeting, The Saratoga Sun asked if S. Robertson had any comment about the situation or Deseret's plans to work with the town of Saratoga on a solution but Robertson stated, "On the advice of my attorney I have been instructed not to talk to the media."

It appears this isn't the first time a nursing care facility under Deseret Health Group founder, Jon H. Robertson has had troubling issues with its finances.

J. Robertson previously served as president of Infinia, Inc. from 2002 to 2004. Infinia Inc. ran a chain of nursing homes in Kansas, Nebraska, Utah, Arizona and Minnesota and was owned by J. Robertson's brother Scott Robertson. According to a June 17, 2014 report by the Utah District Attorney's Office, Jon Robertson was charged and indicted with "filing a false tax return in tax year 2003 for failing to report the large sums of Infinia money he surreptitiously transferred to personal accounts." Jon Robertson was sentenced to serve a one-year sentence in a federal penitentiary.

According to the Wichita Business Journal, the elder Robertson brothers (Jon and Scott), "divided the company citing irreconcilable differences in October of 2006 where the founder of Infinia Inc., Scott Robertson gave his brother Jon 10 nursing homes in Kansas."

Mills is concerned her staff won't be paid since there has already been at least one "bounced payroll check", but says that the entire staff has agreed to keep working because, according to more than one staff member, "the residents here need us."

There is troubling news coming out of Kansas in the last week about facilities similar to Rock Springs and Saratoga, owned by Deseret Health Group, where there have been walk-outs, bounced checks, and reports of insufficient communication from the corporate offices during the closures in that state.

Monday night KAKE.COM reported on its website that the Kansas Department of Aging and Disability Services is currently taking over control of one of the Deseret health care facilities after they were contacted by the Deseret Health Group who informed them "they were insolvent".

KAKE.COM also reported that Agency Commissioner Joe Ewert said that "there are a number of staff who have not received a paycheck since the last pay period."

Calls to Ewert have not been returned as of press time.

Kim Deti, Public Information Officer for the WDH, confirmed Monday that they had not yet received an "official notice" from the Deseret Health Group about the closure, but Deti was able to report that, " the situation with this health care facility is currently being monitored by the WDH, The Department of Family Services, and the Attorney General's Office," and that once the WDH receives an official letter of notice from the Deseret Health Group "that would start the clock for the 30-day state requirement and the 60-day federal requirement in which the company must provide support for the transition of residents to other health care facilities.

On Monday afternoon Rock Springs Deseret administrator, Melissa Elliot, confirmed that she had been contacted by Garett and Skyler Robertson with instructions to start closing the Rock Springs facility which includes finding alternative care for the 58 residents there. Elliot said that the CEO and COO had promised her in a phone call earlier in the day that her and her employees would receive their paychecks as usual during this process.

In an email to the Saratoga Sun on Tuesday, Deti confirmed that contrary to a report made by the local radio station that morning, there was in fact "no task force" currently assigned to this situation

Dave Doorn of Belay Health Care was also contacted by S. Robertson on Monday afternoon about possibly taking over the facility, but as of press time on Tuesday said that there was no progress in that avenue because it was discovered that, "there are several mortgages on the property which of course makes everything harder." 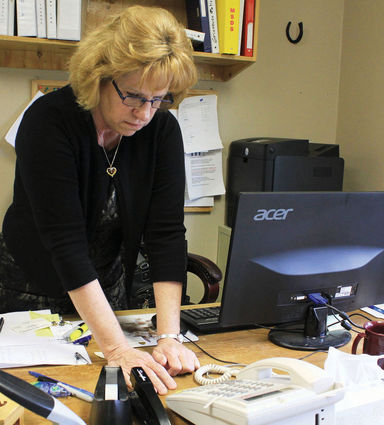 Anita Mills tries to get answers from the corporate office for her staff and residents on Monday.

On Monday evening, Mills called an emergency staff and resident meeting at the center to inform her staff, the residents, and their families about the impending closure and assured them that according to Blocker they would receive the same level of care that they have received from the staff to this point until arrangements for their relocation to another care facility could be made. Dr. Dean Bartholomew was on hand to lend his support and help the staff answer questions about their medical care in the event the facility does close.

After the meeting, Dr. Bartholomew expressed his personal concerns that if the Deseret Health Group were to file for bankruptcy whether or not they would be subject to the 30 day and 60 day rule that a nursing home has to give as notice before closing its facility. At the time of this article the Saratoga Sun was unable to confirm whether or not the notice given to the Licensing and Survey division of WDH and the Attorney General's office was an official notice per the state and federal regulations regarding the voluntary closure of a nursing care facility.

At the time of this article, the Attorney General was in Washington D.C. for meetings and had not returned an email to the Saratoga Sun.