Fish numbers down, participation up at the Ice Fishing Derby 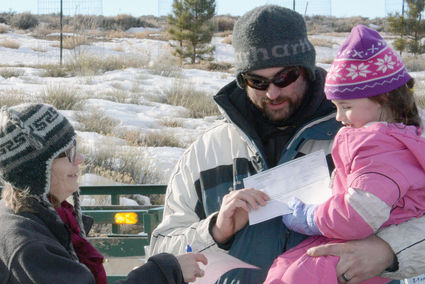 Based on the number of participants the 2015 Saratoga Ice Fishing Derby was a success.

Stacy Crimmins, chief executive officer of the Platte Valley Chamber of Commerce, reported there were 879 registered fishermen at the event and about 200 ancillary attendees. This was approximately 250 more entrants than last year. While it was not a record for the event Crimmins said it was "a really good year".

Small Fry contestant Kaycee Van Buren from Laramie caught the biggest fish of the weekend. Kaycee's big fish was 22 inches long with a girth of 13 inches for a combined score of 35. Since she bested the adults in the derby the chamber of commerce awarded her an extra $100 on top of the $100 first place Small Fry prize.

None of the three large prize trophy fish were caught. Crimmins said the additional $35,000 in prize money seems to have attracted more interest in the derby and the chamber of commerce will have trophy fish again next year. "It's a good lake and it's good fishing, the chances are somebody will catch one of those fish," Crimmins said.

Steve Gale, Regional Fisheries Biologist for the Wyoming Game and Fish Department, said many factors may have led to a slow weekend at the derby. Game and Fish stocks the with about 30,000 7-inch rainbow trout every spring. The rate of fish stocked has not decreased recently.

People camping at the lake increased dramatically this year after the chamber of commerce encouraged campers to bring generators and fuel. Along with filling up the campground at the lake, local hotels report being fully booked for the weekend.