Saratoga Elementary school kids offer thanks to our Veterans 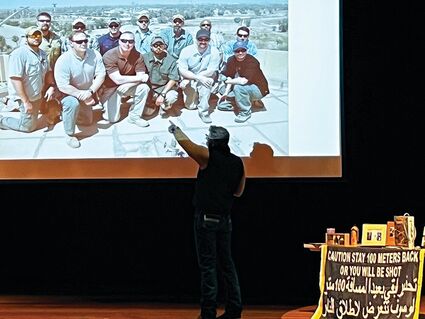 Justin Brown showed the students SES pictures from his days in the military during his presentation.

Saratoga Elementary School honored local veterans in several ways on November 10 at the Platte Valley Community Center. Saratoga Music teacher Ivy Palmer, assisted by elementary school students, made over 60 goodie bags that were delivered to veterans in Saratoga and Encampment by Natalie Adams.

Jaxon Owen and Luke Chatfield marched with snare drums as Beckett Spaulding and Levi Goodwin presented colors. The third graders sang and signed the Star Spangled Banner for the audience.

Each veteran was asked to stand and give their name.

Ron Hoopes introduced Justin Brown who was the guest speaker for the event and spoke on how they should treat each other and themselves.

Brown is a veteran of the United States Army and served in the 1st Battalion, 75th Ranger Regiment.

The students were asked "What is a veteran" and their answers were video recorded and played at the assembly.

All of the elementary school students thanked the veterans for their service.