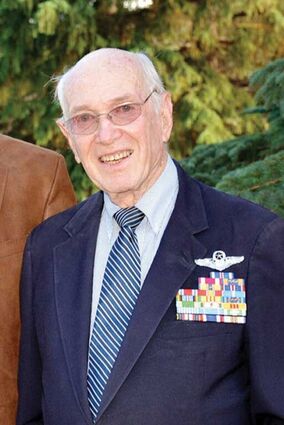 Bill was born on July 29, 1930, in Clarksville, TN, the eldest child of Omer and Esther Baker. He earned a B.S. from Austin Peay State College, followed by an M.A. from Michigan State University and an M.S. from Texas Tech University.

Col. Baker's military career began in 1951 with flight school. His initial flying assignments included F-94's in Korea and Okinawa during the Korean War and F-89's along the Bering Strait during the Cold War. Col Baker was on staff at the US Air Force Academy for six years during the 1960's. While there, his PR programs were twice designated "Best in the Nation" in the American College Public Relations Association competition. During the Vietnam War, Col Baker relocated to the Philippines where he routinely flew combat missions into Vietnam and surrounding areas in C-130's. When Col. Baker retired from active duty in 1971, he had completed 739 combat missions and had been awarded 21 medals, including the Distinguished Flying Cross.

From 1971 to 1978, Bill served as Assistant Dean and Director of Industry Relations for the College of Engineering at Texas Tech University. He moved to Duncan, OK when he was recruited by Halliburton Services Company to work as Director of College Relations. Traveling regularly to land-grant universities across the nation, he held this position until his second retirement in 1985.

In the early 90's, Bill relocated to the Snowy Mountain Range of Wyoming. He married Jeanette Mason in 1998. The two enjoyed fly fishing, traveling and spending time with family before complications from Type 1 diabetes claimed Jeanette's life in 2013. Before her death, the couple endowed the Jeanette and Bill Baker Scholarship Endowment Fund which is awarded annually to students enrolled in the College of Agriculture and Natural Resources at the University of Wyoming. They later started a similar scholarship for students enrolled at Texas Tech University.

Bill is survived by his daughter Beth and husband Clark Hellier of Arlington, TX, grandson Kyle and wife Elise Hellier and grandson Colin Hellier. He is also survived by his brother Bob Baker of Denver and many friends, both in Saratoga and across the nation.

A Celebration of Life will be held on July 9th from 4 – 6 p.m. at the Saratoga Museum Pavilion. A memorial service is also being planned by 1st Presbyterian Church of Saratoga with time TBD. Memorial gifts can be made to the Juvenile Diabetes Foundation, the Jeanette and Bill Baker Scholarship Endowment Fund at University of Wyoming, or the Bill Baker Scholarship Endowment Fund at Texas Tech University.