Saratoga girls enter 1A West Regional Tournament in No. 3 seed 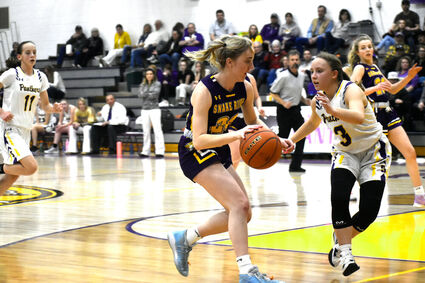 Maddie Teishman (3) looks for a steal during the February 18 home game against the LSRV Lady Rattlers.

The Saratoga Lady Panthers hosted their final home game of the season on February 18 as they faced off against the Little Snake River Valley (LSRV) Lady Rattlers.

The matchup between the Lady Panthers and LSRV was more than just a conference game, however, as regional seeding was on the line.

"This was a big conference game for us," said Head Coach Heather Bartlett. "Had we won we would have tied for 2nd in the conference. However, we came up a little short and lost. This was a disappointing loss for us."

Due to the results of their last regular season game, Saratoga will be going into th...