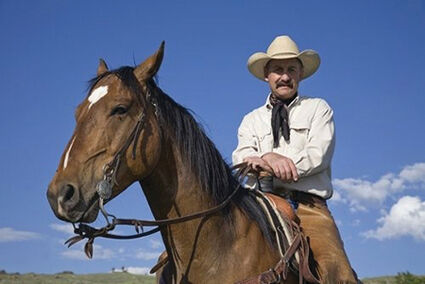 Charles Anthony (Chuck) Larsen was born June 7, 1953 in Sioux Falls, South Dakota to Charles E. Larsen and Phyllis M. (Wachendorf) Larsen. He passed from this life January 5,2022 at Monument Health Hospital in Rapid City, South Dakota after a brief illness, with family at his side. Chuck was an amazing man.  He truly loved people and never met a stranger.  Everyone that knew him loved him and he loved them all.  Chuck retired in June of 2015 after 36 years with Carbon Power and Light in Saratoga, Wyoming where he worked as a groundsman, became a lineman, engineering tech, head engineer and then the General Manager. After retirement Chuck and his wife Linda moved to Hulett, Wyoming where Chuck spent his final years living out his dream.  He loved the area, the people and got to be horseback almost everyday.  Chuck was also a Cowboy Poet.  He wrote all of his own material and loved entertaining people with his jokes and stories and poems.  He met so many wonderful entertainers over the years. He always said they were just like family to him and he loved them all.  Chuck had a very special way of writing whether it was his poetry or articles he wrote for the Wren magazine.  He always made everyone feel like they were part of the story – I always told him his poetry was better "said" than "read".  He was so much fun to watch when he was entertaining. His poetry could be visualized as well as heard.

Chuck is also survived by his dad Charles, his brother Rich and his children and his sister Cathy and her children.

Chuck also liked to hunt deer and elk.  In Saratoga he spent many years packing into the mountains with his horses and mules and his best buddies setting up hunting camp. Chuck was "camp cook" and took that job very serious.  He spent hours going over menus and his supply list to make sure everything went just as planned.  He was also fortunate to go on two hunting trips to Alaska.  On the first hunt he shot a caribou and on the second hunt he shot a Dall sheep that was listed in Boone and Crocket as an all time record sheep scoring 172 and he was honored at their 28th Annual North American banquet in Reno, Nevada as having the third largest sheep for the years 2010-2012.   That same year he finally drew a tag in Wyoming for a Bighorn Sheep and had a very successful hunt thanks to his guide Tanner and his old hunting buddies.  Chuck and Linda bought some other acreage besides their home place outside Hulett that Chuck liked to hunt on as well as ride on and just spend time cutting firewood and cleaning up and just being out with nature.  He was calling coyotes over there last year and was able to call in a mountain lion.  As you can probably tell, our living room is full of his trophies.  Hunting with his grandsons and Scott and Zac Palus whom he called  "Deerslayer" were some of his favorite hunts.

Chucks last big adventure was building his wife a cabin over on the other property.

Chuck proudly served in the United States Air Force. He was also a member of the Masonic Lodge and American Legion in Hulett.

Services for Chuck will be held January 22nd at the Greater Hulett Community Center in Hulett, Wyoming at 10:00 am.    Following the service there will be a Cowboy Music and Poetry "Memorial"  starring  many of the entertainers he performed with over the years. A lunch will follow.

Online condolences may be written at www.fidler-isburgfuneralchapels.com.