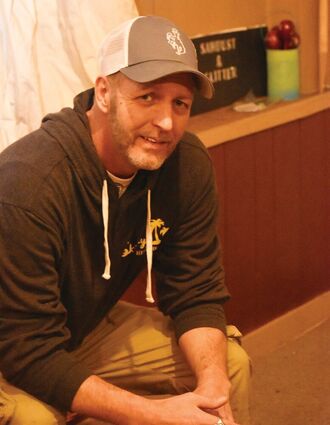 When his bar was shutdown at the beginning of the pandemic, Lenny Powell looked for a way to pass the time.

Lenny Powell, the owner of Skinny's Beer Garden in Hanna, has been pouring drinks for customers for 30 years.

Then Covid-19 came on the horizon and like many bars in Wyoming, he had to close.

"All of a sudden I had all this time on my hands and I wanted to have some sort of purpose," Powell said. "So he decided to start working with wood."

Powell said he started looking at YouTube programs on woodworking and started to try his hand at making furniture. He had plenty of wood to work with because he and his partner Katrina Neal had purchased some land out by Overlook Retreat area, out by Stillwater Park, a few years back.

"Katrina and I wanted to have property out in the woods to get away from everything for years and we had a lot picked out," Powell said. "The property that we were saving up for was even on our screensaver."

It turns out that the property they had on their radar got sold to some friends. Jokingly Powell told the friends that they had bought his property. The couple felt bad and a little time later, they came to Powell and told him of some property for sale that was even better than what they had purchased. Powell and Neal were enchanted with what they saw and bought the land.

Once Powell and Neal had secured the property, they had plans to build a cabin.

"We had to clear all the deadfall to make sure it would not be a fire hazard," Powell said. "We didn't just want to burn all the wood on the property, we wanted to utilize some of it."

Powell said he was impressed with the beauty of the wood of the beetle kill that was on his property.

"One day I was cutting up wood to bring home for our fireplace, and when I cut into it, I said 'wow, look at the grain in this wood, it is beautiful', and it was actually Katrina's idea to cut one piece length-wise and we realized that we needed to save the beauty of this tree."

Powell got some tools and started what he calls "old school."

"I worked with my hands and started sanding and sanding," Powell said. "You have technology today that can make furniture way faster and easier, but I didn't have those tools, so I started simple."

Powell said he started working with wood to honor the tree's life.

"It sounds a little crazy, but there was this beautiful grain that was left from this piece of nature that was from our land," Powell said. "It just seemed that I should try to do something with this lumber because it had stood tall once."

The first object Powell made was a baby crib.

"Katrina's son was having a child and it was her first grandbaby," Powell said. "We were in the woods and I remembered some things from You Tube and I started making the crib with Katrina."

Powell said Neal is essential to him trying his hand at wood carving and furniture making.

"Katrina is the person that inspires me to do this," Powell said. "I got the hands to get it done, but she is the one who pushes me to continue when I start something. Katrina loves the beauty that is in the wood as much as I do. We are a team, and without her, I would not get it done."

Powell said although he enjoyed working with wood, it was not until Covid-19 hit, that he started working diligently with the lumber from his land.

"As a bar owner, I am a busy guy," Powell said. "When Covid hit, we shut down and I had to do something with my free time. So although it was just a hobby, I got more into it. I would not have been as aggressive about completing everything I did, because before, I just didn't have the time."

Powell said as he did more work, he got more confident with his skill and produced better pieces.

It didn't take Powell long to have some furniture and wood carvings for him to show at craft shows.

He and Neal decided to go to the craft show in Medicine Bow that was held this past summer.  It went well, not only because some furniture sold, but because people were impressed with his work.

"I had folk tell how beautiful what I made was," Powell said. "They told me the quality of my work was excellent. That was so good to hear. It wasn't about the money and what I could make, it was great to hear people appreciated what I would say is my art. There is no price on hearing a compliment. Just the expression on people's faces when they saw what I had done, made me happy and gave me joy. You aren't going to see what I create in Walmart."

Powell said quite a lot of his best work is at home.

The work he does display at craft shows is selling.

"I am happy that someone enjoys my stuff enough to want it for their own, but it is still a hobby," Powell said. "I am not looking to create a business and I don't want to make things on request. I do this because I love it. If I started doing it for the money only, then I am pretty sure the love I have creating this stuff would go out the window. I don't want that."

His current works are benches and tables with lakes painted on them. Powell said his ideas for his work come from various places.

"Sometimes, I will have a dream about something and then I wake up inspired to make it," Powell said. "Sometimes an idea just pops into my head. I really enjoy starting something that comes from my imagination, because it isn't work, it is fun."

Powell has donated his work for fundraising events. He recently made a wooden clock with a Wyoming cowboy on the face for a benefit put on by the Hanna Basin, Elk Mountain and Medicine Bow museums.

Powell often likes to make his work have Wyoming flavor to it. One piece he made is a bench with legs shaped like cowboy boots with the lacquered seat of Wyoming's iconic cowboy.

"I have thought about giving it to an organization for charity," Powell said. "But honestly, it is so cool, I don't want to sell it."

Powell does have his work displayed at Wild Visions, a store in the building of Skinny's Beer Garden. He has also been told by a merchant in Saratoga who purchased a chainsaw bear he created, they would display his work.

Powell encourages others to try their hand at wood work.

"People see what I have done and are impressed, but I tell them they could do it," Powell said. "A person doesn't know what they have inside until they try."

Powell said you won't see a website of his work. 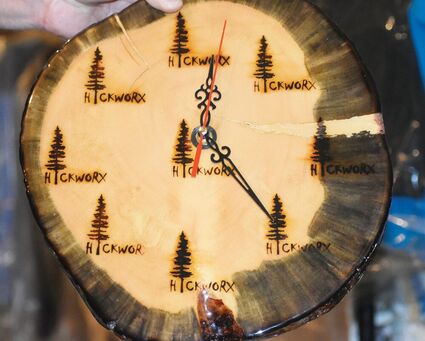 The beetle kill wood used by Lenny Powell comes from his retreat property.

"I want people to see my work in person," Powell said. "I want them to envision it in their place and that happens in person in my opinion. A website means pressure to keep it going and this is a hobby, not a business."

Powell said he feels akin to an artist that paints.

"People understand the concept that an artist with oils and watercolor, paint what they want to and please themselves, and if it sells, so be it," Powell said. "It is the same with me, only I work with wood."

It is ironic to Powell it took a pandemic that nearly destroyed his business to give him time to let this woodworking talent surface.

"Covid challenged the way I lived my life. There was no way to see the shutdown coming and prepare for it," Powell said. "We (the bar) had to adapt and I had to adapt. There are a lot of people who couldn't and they got crushed. I feel lucky we survived the closures and have actually come out somewhat stronger because we did adapt."