Lady Miners learn about themselves 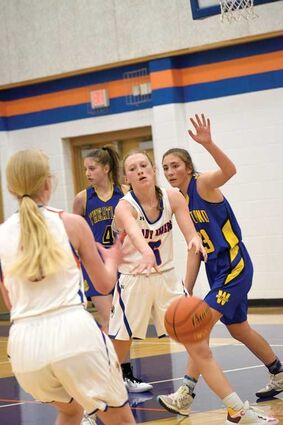 T'lyssa Solaas passes the ball to Addison Scott in the game against Wheatland Sophomores.

The first game of the season for the Hanna, Elk Mountain, Medicine Bow (HEM) Lady Miners had the girls basketball team come out on top against the Wheatland sophomores.

The Lady Miners have eight players and Head Coach Jackie Jones knows that other teams can rest players while she does not quite have the same luxury. To come out with a win the first game, especially since she has a young team with only one senior, was a good feeling. The Lady Miners beat the Wheatland sophomores 34-21.

Then it was off to the Wrangler Invite in Shoshoni where the Lady Miners did not fare as well.

"In those three games we had different girls step up for us," Jones said. "Those girls with varsity experience, being Rainey (Wilson) and Avery (Scott), really did lead us this weekend, but we had Jaime Jeorgeson came out of the woodwork. She scored 18 points against Meeteetse. She hit 8 out of 9 free throws. She had her best game in basketball against Meeteetse."

The game against the Meeteetse Lady Longhorns was played on December 17 and the second game the Lady Miners played in the tournament. They lost 42-36.

The first game, played on December 16 was against the Burlington Lady Huskies and the Lady Miners lost it 64-29.

"One of the things we are definitely seeing as a team is maintaining our mental composure for four consecutive quarters," Jones said. "With us being a young team and a team that has to come in and jell together, it takes time although it will come with more court time."

Jones had a freshman play well which made the coach feel positive.

"Addison Scott came in at key times, and in positions that we were asking a lot of for a freshman, learning all the different roles in a zone defense," Jones said. "I thought Addison did a fantastic job for us this weekend."

"We have a couple more players than the boys team (two more players) I thought for eight girls and three games in such a short time, they did a great job," Jones said. "We have things to work on in taking care of the basketball and really honoring every possession. We have to take care of the ball because we aren't going to beat many teams with the turnovers we are committing in our games."

Jones said shot selection is another component of the game her team needs to work on.

"I tell the girls a missed shot is better than a turnover," Jones said. "But shot selection is about squaring up against the basket before releasing the ball. Those things will get better with time and practice."

The last game the Lady Miners played was against the Riverside Lady Rebels on December 17. She said the team was getting tired. Riverside won 37-18.

"Overall the scores don't show it, but I was pleasantly pleased with the girls this weekend," Jones said. "We played a tough team in Burlington and you look for those positive things that happened in the game and build off them."

She knows soon, after the holiday break, the team will face some strong opponents. Jones said it takes time to build a young team to gain confidence in their abilities.

Jones believes the team will come together in a matter of time.