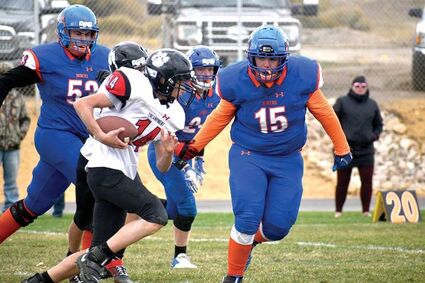 The regular season for six-man football is winding down as the playoffs approach and the Encampment Tigers appear to be heading forward with plenty of momentum.

That momentum continued on Saturday as they were hosted by the Hanna, Elk Mountain, Medicine Bow (HEM) Miners. The Tigers would deal a homecoming heartbreaker to HEM with a final score of 58-12 which saw the Miners go scoreless the entire first half.

"It was good to get a game in this week," said Head Coach Kegan Willford. "We were able to play our younger players for a good portion of the game.  It is always good to get the younger players some experience.  I thought our team came out and played a good game overall."

In the 1st quarter of the matchup between Encampment and the Miners, the Tigers would tear into the gridiron as they scored a total of 20 points. The first 6 points would come following a 29 yard pass from Kaban Pickett to Koye Gilbert. A conversion from Quade Jordan bumped it up to 7 points.

A touchdown from Jordan following a 69 yard rush put the Tigers at 13 points. A conversion from Ryon Miller bumped Encampment up to 14 points. Before the 1st quarter ended, Lane LaBorde would complete a 25 yard rush to score a final touchdown and put the score 20-0 going into the next quarter.

Just as LaBorde was the last to score in the 1st quarter, he was the first to score in the 2nd quarter as he completed a 29 yard rush. That, combined with a touchdown from Brayden Barkhurst after a 19 yard rush, put Encampment up 32-0. A conversion from Michael Anderson took the Tigers up to 33-0. As the first half neared its end, two touchdowns-one from Lucas Stubbs after a 3 yard rush and one from Barkhurst after a 38 yard rush-brought the score to 45-0 at halftime.

As both teams returned to the field in the second half, the Tigers continued to score as they put up 13 points in the 3rd quarter. This time, however, HEM was able to put up points of their own. Miller put up 6 points after receiving a 23 yard pass from Gunner Knotwell, which was followed by a conversion following a pass from Knotwell to Barkhurst. Another 6 points came following a 44 yard pass from Knotwell to Baylin Sifford. The score going in the final quarter was 58-6.

During the 4th quarter, the Tigers would go scoreless while HEM would put up 6 points.

Throughout the entire game, Encampment would rush for a combined 287 yards with 110 of those from Barkhurst, 85 from Jordan, 54 from LaBorde and 45 from Stubbs. The Tigers also passed for 127 yards with 83 yards from Knotwell and 44 yards from Pickett.

Following this weekend's win over the Miners, the Encampment Tigers are 4-1 for the season and 2-1 for conference play. The Tigers sit at the No. 2 spot in the 1A West Conference. Their final home game will be at 2 p.m. on October 16 as they host the Dubois Rams.