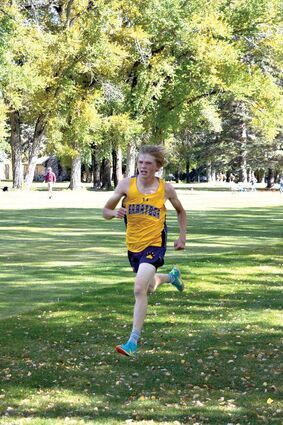 Grant Bartlett pushes himself to finish strong while running in Saratoga on Friday afternoon.

The men's and women's varsity Saratoga Cross Country teams had a good showing for the hometown crowd on Friday as they hosted their annual Shana Ward Memorial Invite at Saratoga Hot Springs Resort.

On the men's varsity side, the Bartlett twins continued to showcase their winning ways by placing in top spots for some individual victories. On the women's varsity side, however, Saratoga's long-distance runners were able to secure a team victory as they placed in the top spot. With only two meets left until the 2A State Cross Country Championship, both groups of runners seem well poised to achi...