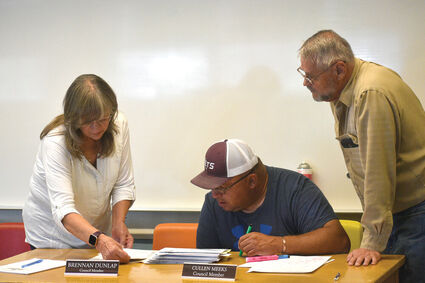 From left, Phyllis McWhorter, Cullen Meeks and Leif Johansson go over town council business during a recent meeting of the Sinclair Town Council.

Members of the Sinclair Town Council found themselves in a bind in April.

Mayor Asa Meeks had not shown up for several regularly scheduled council meetings. Further, there was no contact with town hall to explain why. Additionally, one of the council members, Leo Black, was missing the same meetings and there had also been no contact to explain the reason.

"They just stopped showing up at the meetings," Current Sinclair mayor Leif Johansson said. "We never received anything from either on why they left or any letter of resignation."

According to Wyoming State Statute 15-1-107(a)(iii), a vacancy is determined to exist on the council if a member misses four or more consecutive meetings without an excused absence.

At the time, Johansson was a council member. He has served on the council for over 10 years.

"So the three of us were left, (Johansson, Michelle Serres and Cullen Meeks-no relation to Asa)" Johansson said. "Basically we got hold of the town lawyer and asked, 'What can we do?' They aren't showing up for meetings."

The remaining council was advised, with three council meetings missed, replacement had to be considered. The lawyer did try to contact both mayor and council member and was not successful.

"The lawyer tried to contact both to at least get a letter of resignation, but there was no response," Johansson said. "Why they left is pretty much anybody's guess and only they know."

To fill the vacancies a request for letters of interest was put out.

"We asked for a letter of interest since there were two council seats available," Johansson said. "We got two letters of interest from Phyllis (McWhorter) and Brennan (Dunlap). We accepted them and we now had five council people."

The next step was to get a mayor for Sinclair. State statute dictates the mayor must be selected from members of the governing body.

"Now that we had five council people, we could choose a mayor," Johansson said. "The council voted on the mayor."

"His term is only good until the next election," McWhorter said. "Only Michelle won't be up for reelection."

Johansson said they made sure every step taken to replace A. Meeks and Black was grounded in legality. After the situation was righted with a new mayor and council, all members feel they are working well together.

"We have an excellent council now," Johansson said. "We debate, when it needs to be debated, and we are able to come up with solutions."

Serres and McWhorter have both served as mayor of Sinclair in the past, which is a benefit to Johansson.

"That helps me a lot," Johansson said. "Their knowledge and experience has been extremely helpful."

"We really respect each other's opinions and that is key for this council," McWhorter said. "There aren't agendas being put out by anyone in this group. I think there have been times in the past where personal agendas have been in conflict with the council and it caused problems. I don't see that now at all. "

Johansson was relieved when they got the council situation taken care of.

"It is hard to move forward on a lot of things when you have just half a council," Johansson said. "We really didn't get much accomplished until we got a full council and mayor chosen. Now that we are fully formed, I feel we are on track for the betterment of the town. That is what we will strive to take care of."

He said there is already efforts to make the town better under this new council. A zoning committee is being formed, which has not happened in the past. The renovation of the Sinclair Theatre has also been completed and it opened in late August. He said the town hall has been remodeled which will allow the museum to have two floors.

"Now we are looking at doing something with school that was recently put in the town's care," Johansson said. "We are figuring that out now."

"It is true we are moving ahead with a lot of projects," C. Meeks said. "I do feel like we are working very well together."

Serres agrees the situation has vastly improved since April.

"Quorums were tight to make and we had to move forward," Serres said. "We have done some good things and we have some good people on the council."

Serres said the council is happy to have the missing mayor and council member remedied.

"It was bumpy, but we have completed a lot of projects and done a lot of great things," Serres said. "I hope the town continues to support us as we continue to support the town."