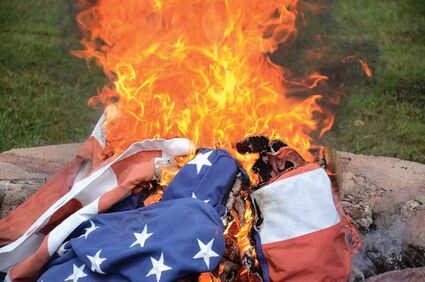 Ceremonial flames burn away at an American flag on September 12 at Grand View Park in Encampment.

It was a warm, nearly cloudless, fall day in Encampment as columns of white and black smoke rose from the firepit at Grand View Park on September 12. The source of the smoke came not just from wood, but from American and Wyoming flags being placed on the open flame.

Such a sight was surely shocking to some, especially two young boys who witnessed the act and raced home to tell a parent. The parent, equally concerned, called dispatch at the Saratoga Police Department. It was, if anything, an opportunity to learn. Those gathered at Grand View Park weren't protestors, but members of Platte Val...