Saratoga defeats Chiefs in their first home game of the season

Saratoga Middle High School's Tuker Carricato charges down the gridiron on Friday evening in the Panther's season opener against the Wyoming Indian Chiefs.

At the beginning of the season, Logan Wright, head coach of Saratoga Panther football, said the Panthers were underdogs.

While the game didn't go well in the beginning with an early fumble by the Panthers, the Cheifs failed to captilize on it. The teams remained scoreless until Tuker Carricato went in for a touchdown with 4:50 left in the 1st quarter.

From this point on, the Panthers could hardly do any wrong and Wyoming Indian didn't do much right. After Carricato's touchdown and an extra point, the Panthers picked off the ball seconds later keeping the Chiefs scoreless.

The second touchdown by the Panthers would be a long pass from quarterback Geoffrey Johnson to Heston Fisher, where the receiver went in for a touchdown. The extra point was good again. There was 2:18 left in the 1st quarter. The score was 14-0.

The next scoring opportunity came when the Panthers got a safety making the score 16-0. Moments later Josiah Stockwell ran in for a touchdown, but it was nullified due to a penalty. Five seconds later, Carricato ran the ball in from the Chief's 38 yard line. The score was 23-0 after the extra point was hit with 10:19 left in the 2nd quarter.

Wyoming Indian had no answers to the offense the Panthers were throwing at them. Stockwell got a touchdown that counted with 7:27 left before halftime. The extra point being missed made the score 29-0.

Another pass from Johnson to Fisher created another touchdown with 4:13 left before the half. The score was 35-0. The extra point was missed.

A blocked punt by the Chiefs resulted in another safety for the Panthers making the score 37-0 with 1:27 left in the 2nd half.

With no time left before half-time, Carricato ran the ball in to score. With the extra point good, the game was 44-0 at the half.

Wright played the next half with his less experienced players and they did well too, although the Chiefs were able to score 8 points. The Panthers won by 54 points.

Wright couldn't have been happier with how his team played for the first time this season. He was especially pleased with the defense.

"We have a lot to still learn and the team we face in Moorcroft is going to be a challenge, but saying that I do think our defense is very good," Wright said. "I hope we stay true to that form as the season goes on."

His quarterback pleased him too. 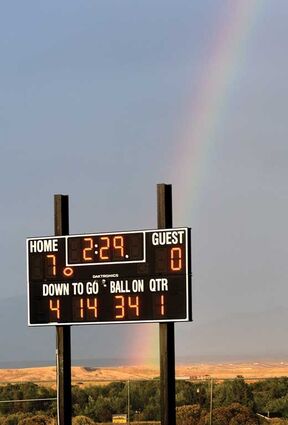 The rainbow behind the scoreboard early in the game seems to foreshadow Saratoga's win.

"Geoffrey threw two passes and they were right on the money," Wright said. "He has never been a kid that needs stats or glory, he just stays calm and does what is best for the team. And Heston has good size and good hands and was good last year, but was probably overlooked sometimes."

He said the team scored in a variety of ways and that made him happy.

Wright had praise for Kelton Reeder on defense and Carricato for not only his scoring but what he accomplishes on defense.

"Tuker may look small, but he is strong and quick and gets the job done," Wright said. "He does a really good job on defense too."

Wright looks forward to going and facing the Moorcroft football team on August 10.

"We are healthy and ready to go and face our next challenge this coming week," Wright concluded.