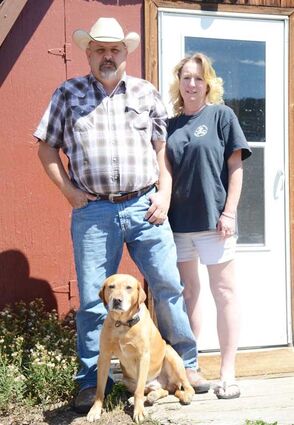 Troy and Barb Wallace, and their dog, junior, are ready to serve guests at Ten Mile Inn.

A coal miner and a part salesperson buy an inn.

That's not the start of a joke. The Ten Mile Inn has recently come under new ownership with Troy and Barb Wallace. Recently from Glendo, Wyoming, Troy worked at the North Antelope Rochelle Mine and Barb spent the last 25 years selling parts for Ford and Dodge.

While they spent the last decade in Glendo, the Wallaces were previously residents of Glenrock and, before that, Saratoga. One might say they've come full circle as they make their return to the Platte Valley. In doing so, they have purchased a business which has a role in the Valley's history.

For over a century, the Ten Mile Inn has served residents and guests of the Platte Valley and the Snowy Range. Originally established in 1906 as a gathering place for loggers and tie hacks, the Ten Mile Inn hosted Big Bands from the 1930s to the 1950s such as Glen Miller and Louis Armstrong. Having lived in Saratoga before, Troy and Barb were familiar with the establishment and the previous owners, Ken and Kimberly Thyne. The Thynes bought the Ten Mile Inn in 1995 and were looking to sell after nearly three decades of running the business.

The Wallaces happened to pass through in June of this year and stopped to visit Ken.

"We came up here and visited with Ken (Thyne) because we've known him for quite a few years and he was mentioning it was for sale," said Barb. "We went home and thought about it for three weeks and here we are."

What led Troy and Barb to leave Glendo and become owners of one of the historical establishments in the Valley?

"Tired of our old jobs, just turned 50, ready to do something different," Barb said.

Due to the friendship the Wallaces have with the Thynes, the new owners said the transition has been easy for the most part. The most part covers the questions Troy and Barb have had for Ken as they have transitioned to running the Ten Mile Inn on their own. What has provided some difficulty for the couple is the number of licences to put under their name.

"There's a permit for everything," Troy said. "I'm not even joking."

If guests don't want to cook their own food, however, and crave something more than prepackaged food, Troy and Barb rely on another Snowy Range business.

"We're really good friends with the Rendezvous (Lodge) so we've been sending everybody to the Rendezvous and when they have people who need a place to stay, because they don't have as much lodging, they send everybody here," said Troy.

For the moment, Troy and Barb are okay with not running a kitchen or selling food and it hasn't seemed to affect the business any. The bar inside the main building of the Ten Mile Inn has been popular, according to the couple. While they try to maintain hours of 8 a.m. to 8 p.m., they said they wouldn't close down the bar until all the guests had left. That has led to some nights ending around midnight.

"We've had some good weekends, we've been full every weekend and they're staying four or five days," said Barb. "The bar's been doing great."

While summer is, for all intents and purposes, over, the new owners aren't too worried. As the warmer months become colder, the people coming up through the Snowy Range will change from the summer sight-seers to the winter snowmobilers and the Ten Mile Inn will be ready. Along with the five cabins, five rooms and five recreational vehicle hookups, the business will continue to sell fuel along with snowmobile and ORV stickers.

As Troy and Barb prepare to enter a new chapter of their life, they are excited to be adding another chapter to the history of the Ten Mile Inn.