By The Wyoming News Exchange 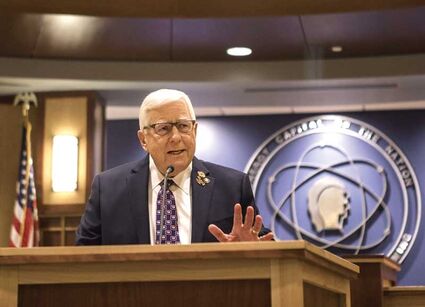 U.S. Sen. Mike Enzi, who died late Monday from injuries sustained in a bicycle accident, is shown here announcing in May, 2019 that he won't run for a fifth term.

Former U.S. Sen. Mike Enzi died late Monday after being seriously injured in a bicycle accident in Gillette on Friday.

A post on Enzi's Facebook page said the former Wyoming legislator died Monday at the UCHealth Medical Center of the Rockies in Loveland, Colorado, where he was flown for treatment after the accident.

"Former Wyoming U.S. Senator Mike Enzi passed away peacefully (Monday) surrounded by his family," the post said. "His family expressed their deep appreciation for all of the prayers, support and concern that has been shown."