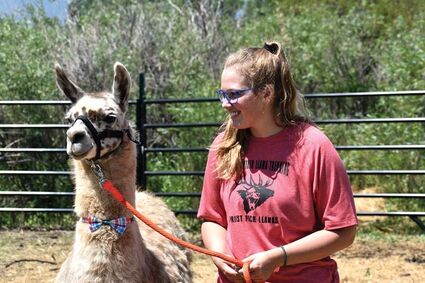 Mackenzie Priest looks at her llama, Peak, who is getting used to wearing a bow tie.

According to her parents, Elk Mountain residents Steve and Courtney Priest, Mackenzie has been obsessed with llamas since she was about eight years old.

"I did like the book 'Llama Mama'," Mackenzie, a sophomore at Hanna, Elk Mountain, Medicine Bow High School, said. "But I can't really say why I wanted one."

Steve and Courtney took Mackenzie to a llama farm to see if her desire to have one was real.

It was and Mackenzie got her wish. She is now the proud owner of Peak, a llama the family calls a mutt.

While considering the purchase of a llama, the family learned llamas are useful packing animals.

"Most people pack with a llama that is a ccara and they are actually a light wool llama where you don't have to sheer them," Steve said. "You just have to brush them out. These are not ccara but they are trained for packing."

Steve speaks of plural because the family now has four llamas. Mackenzie bought Peak and the Priest family bought the other three.

Llamas are part of the camel family and date back 40 million years to the central plains of North America. They became extinct during the Ice Age with the exception of the llamas that migrated to South America. The Incas domesticated llamas thousands of years ago, making it one of the oldest domesticated animals in the world

Llamas are nimble. They don't spook easily and are a social creature. Their feet are two-toed, wide and tough-skinned, which gives them an ability to travel well on rocky landscapes.

Another attribute llamas have, according to Mackenzie, is they are great guard animal and they are used in Wyoming to guard livestock.

"They will kill coyotes and dogs that try to attack," Mackenzie said. "They are very protective."

They also spit when unhappy or in self-defense.

"They will spit at each other when they are fighting over food," Steve said. "But in general, they are friendly animals."

Steve said the purchase of four llamas was part business decision along with wanting to please Mackenzie. The llamas are being trained to take packs on hikes around Elk Mountain.

"They can go with hunters carrying supplies and pack out kills," Steve said. "Also people like to have their pictures taken with a llama and that is why Peak has on a bow tie."

When the llamas are ready to go with hunters or hikers, they will be able to carry about 60 to 75 pounds. Steve said how much they can carry is all related to their weight. Once at a campsite, they can just eat grass.

"Usually they just eat, and the grain we give them is sort of a treat," Steve said. "They don't really need special food."

Courtney said the people that sold them the llamas have already had success with their llamas being used by hikers and hunters out in the Big Horn mountain range.

Using llamas for pack animals is being done in a few areas of Wyoming, but the Priests are one the first to be doing this in Carbon County.

"It makes sense to use them when going out to trek," Steve said. "They don't spook easily, they are more sure-footed than a horse or mule. They can handle cold weather and they are friendly."

Llamas are not only agile on land, they are fast. Llamas can run up to 35 miles an hour. They have just three-compartment stomachs and regurgitate their food, hours of initial intake, and after being partially digested in the llama's first stomach.  The cud is chewed again to aid in the digestive process for full digestion.

Llamas communicate with each other via clucking, humming, and ear and tail movements.

Steve said when the llamas are ready to go with people out into the wilderness a year from now, the renters will have to take in some training.

"They will have to know how to handle a llama and how to pack it," Steve said. "When we did it, the training took about three hours. Because llamas are pretty docile and chilled, you can let a novice take them out into the woods for a day or two. Horse owners aren't usually going to be that comfortable to do that."

Steve said the pack saddles are very easy to put on and clean.

The Priest family has been acclimating the llamas to wearing slightly heavier packs each day to get them in shape.

It is not only getting the llamas in shape that the Priests must have ready before they can let the llamas go into the woods with hunters.

"We have to get a permit from the forest service and we have started working on the paperwork," Steve said. "I think, maybe, next summer people can start to use them on hikes. People having pictures with them can happen sooner."

The family said this year with the llamas is laying the foundation. 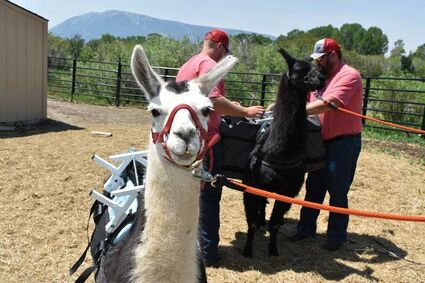 Cody, left, and Steve Priest get their llamas ready to go for a walk with their packs.

"This is the time for them to get used to us," Courtney said.

Three of the llamas are geldings. Peak is not. The Priests hope, in the future, they will acquire some females and begin breeding llamas.

Newborns can weigh from 18 to 40 pounds and begin walking about an hour after birth. Nursing generally starts in the next hour. Their gestation period takes about 350 days. Baby Llamas are weaned six months after birth.

Peak is still young and growing, but the others are between eight and ten years old. A llama can live from 20 to 30 years.

"We will retire these from packing when they turn around 14 or so," Steve said. "Then they will just hang around the pen."

With Elk Mountain in the background of their pen, these llamas would be hard pressed to have a better place to work and retire.