Brit and Fish coast to coast 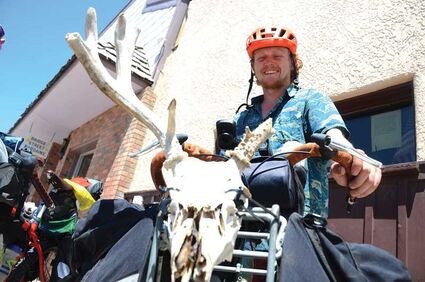 Summers in Wyoming can be heralded by several sights. For some, it's the flurry of cotton from nearby cotton trees which agitate their allergies. When it comes to others, the seasonal opening of mountain byways is the sign.

An almost universally accepted sign summer has arrived in the Cowboy State is the sights of bicyclists peddling either through town or in between towns. Some try to maintain a certain pace and an average mileage as they ride the TransAmerican Trail from Astoria, Oregon to Yorktown, Virginia.

Britton Bowman and Luke Fischer are not those people.

"We're probably one of the slowest groups on the TransAm," said Bowman. "We see these people hustling through these towns and we're just taking our time."

The TransAmerica Bicycle Trail officially began in 1973, started by one of the co-founders of the Adventure Cycling Association as he made his way from Alaska to Argentina. The first official biking of the trail was in 1976 and dubbed the "Bikecentennial" and saw nearly 4,000 bicyclists on the route.

With more than 4,000 miles from Astoria to Yorktown, it can take some time to finish the trail once it is started. Bowman and Fischer started biking the trail on May 1 and arrived in Saratoga on June 22. The two high school friends, additionally, are adding a little bit more to the trail than what is officially published by the Adventure Cycling Association.

"We wanted to be able to start with our rear tire in the Pacific (Ocean) and end with our front in the Atlantic (Ocean)," Bowman said.

Instead of starting in Astoria, the duo put their rear tire in the Pacific at the Peter Iredale Shipwreck in Hammond, Oregon. With Yorktown technically being a cove, the two plan to officially end their route at Virginia Beach as they place their front tires in the Atlantic.

Bowman and Fischer grew up in Arkansas but, after high school, both wound up on different ends of the United States. Bowman currently lives in Utah while Fischer lives in North Carolina. With Fischer spending his youth working in a bike shop, the idea of biking the TransAmerica Trail was planted in his mind as a teenager by the manager of the shop.

"The manager there was always talking about touring and stuff and he always popped that into my head," Fisher said. "We finally just decided to do it one day."

While the trip had been a dream for years, the planning of the trip itself took less than a month. With the two high school friends in separate states, and both working, they communicated when they could. Because they wanted to take their time on the trip, Bowman and Fischer both quit their jobs so they wouldn't rush from one coast to another.

Bowman admits it helps both him and Fischer are younger and do not have families.

Though the duo are taking their time, they arrived in Saratoga on June 22 and were still in town on June 23, they are beginning to increase the amount of miles they put in each day. According to them, prior to Missoula, Montana they had averaged 30 miles per day. Now the two are averaging 60 to 80 miles per day, when they haven't stopped to enjoy the amenities of a town they enjoy.

Wyoming's wide open prairies and big sky have certainly been a plus for Bowman and Fischer.

"In Colorado, you're in the mountains so you're just looking up. Out here, you're just on these flat plains with these towering mountains," said Bowman. "It's just a good perspective on how massive everything is."

"It's amazing, it's so beautiful," added Fischer.

As luck would have it, when the two bicyclists rolled into Saratoga on June 22, old friends from high school were also arriving from a recent trip to the Teton Mountains.

"So we grabbed lunch at Firewater (Public House)," Bowman said. "Then we just hung out on the river right next to Firewater until dinner and then went back."

Of course, it wasn't all just riverside hangouts and Firewater for the biking duo. The two also visited the Saratoga Hobo Hot Springs, which is owned and maintained by the Town of Saratoga.

"I think that's the coolest thing about the town, I've noticed," said Bowman. "A bunch of money has clearly been put into this and it's free to the public which is so cool."

As of June 23, Bowman and Fischer were still unsure if they were staying yet another night in Saratoga or if they were going to continue down to Colorado. According to the routes listed on the Adventure Cycling Association website, the route goes from Rawlins, Wyoming to Pueblo, Colorado.

For both young men, while just a little less than two months into the trip, it has already been the trip of a lifetime. 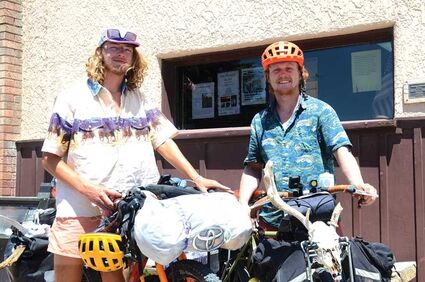 Luke Fischer, left, and Britton Bowman took some time out in Saratoga recently.

"When do you get to see the whole US (United States) and really get to dig into each place along the way," said Bowman.

Added Fischer, "If you ever have any doubt that there's not good people in the world, bike across America. You'll find out real quick."

The two are also documenting their trip on Instagram. Bowman is @brits.life and Fischer is @_luke_fish.