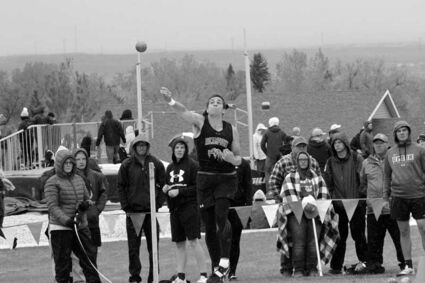 Dalton Peterson follows through on putting the shot at Kelly Walsh High School in Casper.

Encampment's track and field athletes traveled to Casper this weekend to compete in the State Track and Field Championships for three days at Kelly Walsh High School. Though none of them returned home with "the gold", all those that attended placed in at least one event with several placing in multiple events.

"I thought our team had a good state showing overall," said Head Coach Kegan Willford. "There was some really good competition in 1A this year and I thought our team competed well. It was nice to see our seniors end their high school track careers with placings in all of their events and even a couple of All-State honors."

In the track events, Amber Stubbs was able to end her senior year as the State Runner-up in the 3200 meter run. Stubbs placed 2nd and earned All-State honors as she finished with a time of 13 minutes, 13 seconds. Stubbs also competed in the 1600 meter run, where she came in 6th place with a time of 6 minutes, 5 seconds.

Allison Bromley also competed in the 3200 meter run, coming in 4th place with a finishing time of 13 minutes, 23 seconds. In the 300 meter hurdles, Bromley finished with a time of 57.08 seconds.

In the field events, Lizzi James returned to Casper to defend title as 1A Girls Discus Champion, which she earned in 2019 as a sophomore. While James would earn All-State honors in discus, she would come in as State Runner-up as she came in 2nd place with a distance of 105 feet, 2 inches.

The 400 meter relay team of Lane LaBorde, Quade Jordan, Koye Gilbert and Peterson came in 8th place as they finished with a time of 49.14. 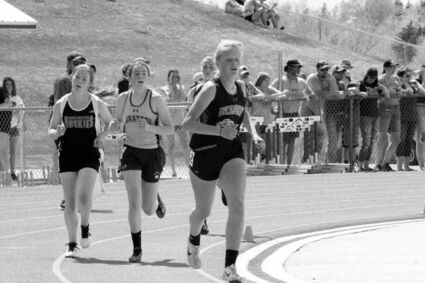 Amber Stubbs keeps her pace during the 3200 meter run at the State Championships.

In the field events, Peterson came in 4th place in discus with a distance of 127 feet, 5 inches. Jordan followed in 8th place with a throw of 125 feet, 4 inches.

The Encampment track and field team will see few changes next season. Though Willford loses Peterson and James to graduation, the remaining team members still have some seasons ahead of them.

"I'm excited to see what our returning athletes will do in the future," Willford said. "A lot of them made excellent progress this season and should be competitive in the future."