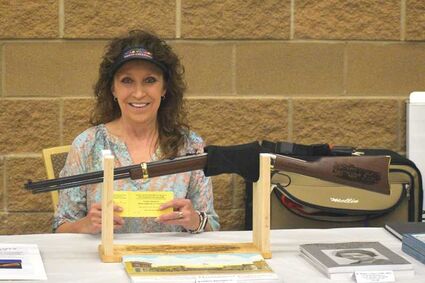 Hanna Basin Museum employee April Avery shows off raffle ticket for the Golden Boy 22 rifle being auctioned off to help fund restoration on the World War I monument in Hanna.

The World War I monument in Hanna is close to being repaired entirely and should be ready for its unveiling on July 4.

The monument was originally dedicated on July 4, 1920. The Hanna Basin citizens honored 111 servicemen who served in World War I by erecting a large white monument featuring a cast bronze plaque listing their names.

Sadly, the monument was vandalized in the summer of 2015 when the bronze plaque was taken off the stone monument.

The plaque was found later that year by a crew member for Hanna public works.

The World War I monument, in addition to having a plaque of names who...