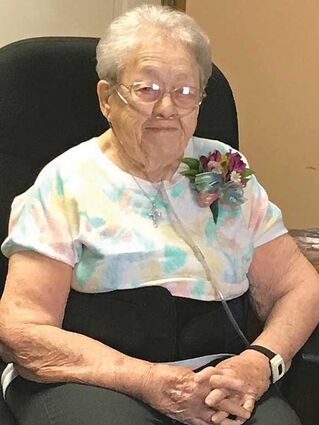 Wini spent her youth in Saratoga, Wyoming before marrying Howell Fagan (Burr) Bryant on January 25th, 1949 in Rawlins, Wyoming. They were married for 58 years before Burr passed away in 2007.

They spent the majority of their married life ranching in the Hat Creek area, before moving into Lusk in 1991. Wini enjoyed ranching but, later in life, she enjoyed working at the Stagecoach Museum, the Department of Family Services, Niobrara Public Health, The Lusk Herald and the Niobrara Chamber of Commerce, where she retired at the age of 90.

Wini was such a wealth of information and history of the area, that she was a perfect fit for the chamber job. In addition to her various jobs, Wini was an excellent poet and genealogist.

Wini and Burr welcomed home their daughter, Sally Jane Bryant on January 12th, 1964. Sally lived in Lusk most of her adult life and presented Burr and Wini with their only grandchild, Gregory Bryant on January 18th of 1988. Wini and Burr helped raise Greg. Wini remained at home with Greg until she entered Prairie Pines Extended Care at Niobrara Community Hospital in 2020.

She is survived by her sister, Merle Starr of Saratoga, grandson, Greg of Lusk, special friend, Jackie of Lusk, and numerous nieces, nephews, great and great-great nieces and nephews and many, many friends.

Memorial services will be held at the First Baptist Church on Friday, April 30th at 2:00 p.m. Due to Wini's vast involvement in the community, we are asking that memorials may be made in Wini's memory to the donor's choice.

Pier Funeral Home is in charge of arrangements.