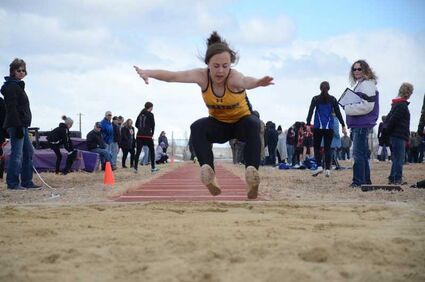 Saratoga's Whitney Bennett comes in for a landing in the triple jump.

Saratoga didn't have to go very far this weekend as they hosted their annual track meet on Saturday. While at the Burt Willford Memorial Invite, a number of Head Coach Rex Hohnholt's student athletes placed well even while working against cooler temperatures.

While two relay teams for the boys were able to prequalify for the state track meet, Whitney Bennett broke the very same school record she set just a week prior.

Starting with the track events, Savannah Wells placed 1st in the 100 meter dash with a time of 14.61 seconds and was followed by Jaden Campbell, who pl...