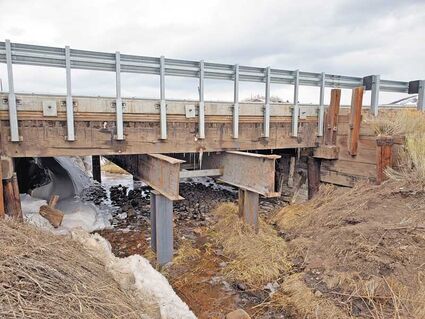 New supports to the bridge at mile marker 57 on Highway 130 have allowed weight restrictions to be removed until the bridge is replaced later this year.

Within a month of the Board of Carbon County Commissioners (BOCCC) being informed about weight restrictions on a Highway 130 bridge at mile marker 57.52, those restrictions have been removed.

As was reported previously (see "A bridge not far enough" on page 1 of the March 10 Saratoga Sun), the BOCCC was notified by Jason Armbruster, district ranger for the Medicine Bow-Routte National Forest and Thunderbasin National Grasslands, about the weight restrictions on March 2.

Armbruster, for his part, was in attendance to see if the county commissioners were willing to permit heavy truck traffic through Carbon County Road 504.

The 15 miles of county road begins at the intersection of Highway 130 east of the bridge and turns into Pic Pike Road. Of those 15 miles, only 10 miles are maintained during the winter season. In addition to that, much of the county road is accessible only with four wheel drive and goes through agricultural property and irrigated ranch land.

According to Armbuster, the United States Forest Service had been contacted by the Wyoming Department of Transportation (WYDOT) in November 2020 about weight restrictions on the bridge. Those weight restrictions were 25 tons for a tractor trailer and 27 tons for a truck and pup combination, which prevented logging companies from both transporting equipment to and timber from timber sales in the Snowy Range.

While the commissioners made no formal motion, the cost of nearly $1 million to upgrade the county road led the BOCCC to contact WYDOT about addressing the weight limits. Two weeks later, the commissioners were informed that WYDOT had implemented both a short-term and a long-term solution (see "Repairing bridges" on page 1 of the March 24 Saratoga Sun).

On March 31, WYDOT announced the results of the short-term solution with the lifting of weight restrictions.

"Weight restrictions for legal loads traveling over a Wyoming Highway 130 structure located east of Saratoga have officially been lifted," wrote Jordan Achs, District 1 Public Relations Specialist in a press release. "Crews with the Wyoming Department of Transportation and Reiman Corp. recently finished shoring the bridge, which adds additional support underneath the structure."

The press release went on to state that loads that were either oversized or overweight would still need to obtain the proper permits and permission from the Wyoming Highway Patrol to cross the bridge at mile marker 57.

Additionally, the discussion by Layman on March 16 about a culvert was confirmed in the March 31 press release. Achs wrote that the culvert would replace the bridge this summer and that, once the culvert had been placed, no weight restrictions would be in place for legal loads.