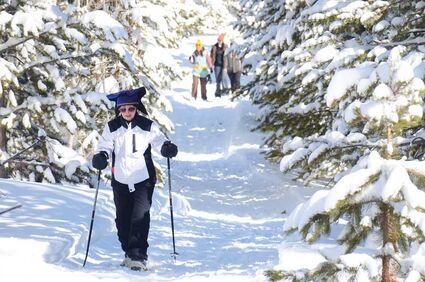 Lynn Finney makes her way through the snow on Valentine's Day during the Ben Romios Memorial Poker Run.

Despite the subzero temperatures in the Valley on Valentine's Day, snowmobilers, snowshoers and cross-country skiers took to the mountains to participate in the annual Upper Valley Search and Rescue's Ben Romios Memorial Poker Run.

In its 23rd year, the annual event is held in honor of the late Benjamin F. Romios. Romios, an Encampment resident and 1995 graduate of Encampment High School, was an experienced snowmobiler who lost his life in January 1998 in an avalanche.

The money raised by the poker run benefits the Upper Valley Search and Rescue, of which Romios was a member upon his passin...