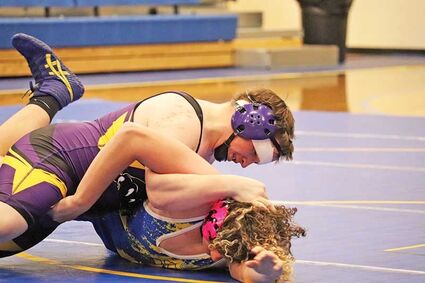 Kaden Hedley works for a win at the Shoshoni Dual over the weekend.

The Saratoga Panthers wrestling team traveled to Shoshoni and Burns this past weekend competing against: Shoshoni, Rocky Mountain, Burns, and Cheyenne East. The Panthers were joined by the Hanna, Elk Mountain, Medicine Bow wrestling team when they went to Burns.

Head coach Jared Mason was happy with his team's results.

"Most wrestlers earned at least one win each, and several had winning records," Mason said.