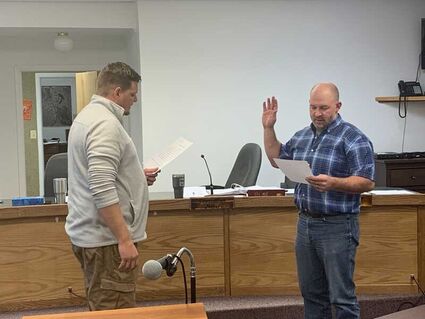 Mayor Pro-Tem Bob Keel, left, swears in Councilmember Creed James as mayor of Saratoga following his appointment to the vacancy on January 5.

After nearly five months without a mayor, the Saratoga Town Council has finally appointed a member of the governing body to fill the vacancy. On January 5, recently elected council member Creed James was appointed just minutes after being sworn in to the town council.

The vote to appoint James passed 3-0-1 with James abstaining from the vote.

Following James' appointment to mayor, in which he was sworn in by Mayor Pro-Tem Bob Keel, a vacancy was declared on the council for James' seat. While it was stated that the position would be to fill a four year term, Wyoming State Statute 15-1-107(c) states whoever is appointed by the governing body shall serve "until his successor is elected at the next general municipal election and qualified". That may mean that whoever is appointed to the now vacant council seat will serve two years instead of four until the 2022 election.

The Saratoga Sun will have more in the January 13 print edition.