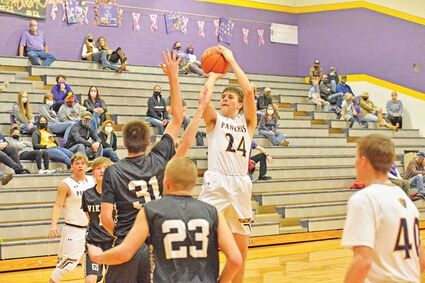 Heston Fisher (24) takes aim during Friday's game against the Vikings.

While the Guernsey-Sunrise Vikings may have come to the Valley in hopes of stealing a win from the Saratoga Panthers on Friday, the Panthers sunk any hopes of a win with a substantial double-digit lead as they headed into Christmas break.

"Obviously, just really pleased," said Jason Williams, head coach of the Panthers. "(The) boys just came out and played really hard and that's what I was hoping we would do. They just played the game the right way and I couldn't be prouder of them for it."

The win over the Vikings is just the most recent pre-season win for Saratoga as they dispatched the L...