Encampment falls to No. 1 Meeteetse in first home-game loss of the season 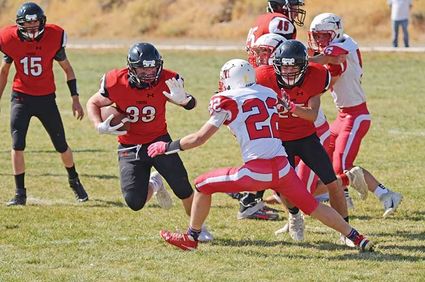 Freshman Quade Jordan puts his hands up to guard against the Longhorns as he runs the ball down the field on Saturday.

The Encampment Tigers were dealt their first defeat on their home field this week as they hosted the No. 1 Meeteetse Longhorns (5-0, 4-0) on Saturday. The undefeated Longhorns handed Encampment their second conference loss of the season, as they fell to the No. 2 Farson-Eden Pronghorns on September 26.

Though the Tigers would put up plenty of resistance for Meeteetsee in the first half of the game, the second half saw the Longhorns put their heads down and push through Encampment for the final win.

"We faced a team with a lot of momentum in this game," said Kegan Willford, head coach of the...