In Homecoming game against Midwest, Miners lead by 60 points 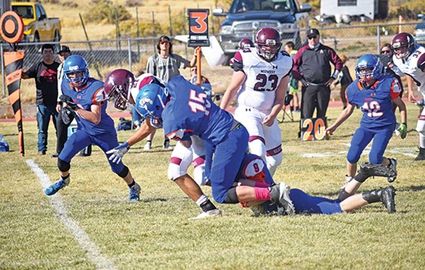 A swarm of Miner football players converge on a Midwest player as he attempts to get down the field.

After going 0-3 this season, a homecoming win was important to the Hanna, Elk Mountain, Medicine Bow (HEM) High School Miners according to Head Coach Zach Scott.

It was senior day, in addition to homecoming, and the players did not disappoint the fans that came to watch, hoping to see the team's first victory.

The Miners not only got a win, but they looked like the team that decimated opponents last year when they went to the championships.

The majority of the 1st quarter went entirely to the Miners as they scored 22 points against the Oilers in the first 10 minutes of the game while keepin...