Lady Panthers have 2-0 weekend against Rock River and Encampment 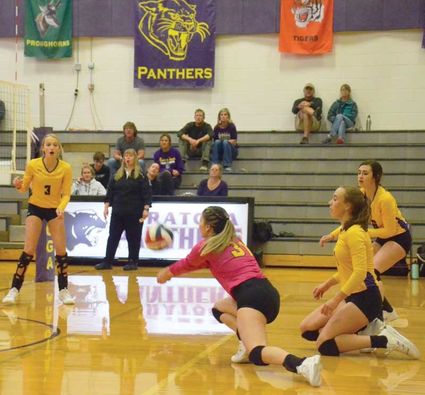 Saratoga's Tasia Daley moves to dig out an attempted score by Rock River on Thursday evening.

The Saratoga Lady Panthers snagged their first conference win last week as they hosted two games in the Panther Den. On Thursday, Saratoga welcomed the Rock River Lady Longhorns (2-4) for a homecourt victory. Friday, they hosted their conference and Valley rivals, the Encampment Lady Tigers (2-3, 0-2), and dispatched them in three sets.

For Head Coach Shayley Love, the important thing is seeing the team begin to mesh on the court in the early part of the season.

While Saratoga took care of the Lady Longhorns in three sets, Rock River didn't make it easy. In...