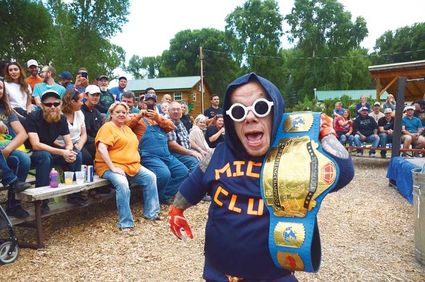 Teo shows off his championship belt as he makes his introduction to the crowd.

When driving through Riverside, population 52, one might not expect there to be much for entertainment as they take Wyoming Highway 230 down to Colorado. In this small town, which was home to WhatFest for a number of years, it all just depends on the day one is coming through.

Take, for example, the night of July 25.

Despite the unusual humidity and the dark clouds that threatened rain, a crowd that was nearly the population of Riverside gathered behind the Bear Trap Cafe and Bar on four sets of stands surrounding a ring. Spectators, from young to old, had just been told by someone in the ring that he had seen more teeth in a newborn baby's mouth than in all of Riverside.

A roar of laughter erupted through the audience. The person making the "insult" is Hank Dalton, a 25 year wrestling veteran who was trained by professional wrestling legends Jerry "The King" Lawler and Bill Dundee. Dalton plays the heel perfectly as he takes on Teo, the reigning champion. Neither Dalton or Teo are especially tall. In fact, it's their lack of height that has attracted spectators.

Professional wrestling as it is known today began in the 1920s but gained its popularity between the 1950s and the 1980s as it made its way to television. As that popularity increased, wrestling relied more on the theatrics that began to appear in the 1930s as storylines and characters were developed for viewers. At the height of its popularity, wrestling personalities such as Hulk Hogan, Randy Savage, Andre the Giant and more become icons of popular culture.

"I became a big fan back in high school and I started going to a bunch of local shows and everybody kept telling me 'Get trained, you can make a lot of money.' There was a restaurant in Cedartown, Georgia and, in the back of the restaurant they actually had a wrestling ring and I started doing a lot of my training there," said Little Fabio, a MicroMania Wrestler. "I started on what we call the independent circuit, worked there for a couple years and then, after about three years, I started doing this full time as my job."

Midget wrestling has had a similar rise and fall through the decades. Tracing its origins to early vaudeville shows, the heyday of midget wrestling was in the 1950s and 1960s and was increasingly popular in the 1970s and 1980s. That popularity, however, began to decrease as the wrestlers were put in more and more comedic roles, often appearing as miniature forms of well known wrestling stars. This led to criticisms from Little People of America (LPA), a non-profit group formed by actor Billy Barty in 1957.

"In LPA, you have your DAAA (Dwarf Athletics Association of America) events, which they have basketball. Wrestling's just the same. It's just the same as basketball, it's just another sport. So why do they have to blacklist the wrestling (sic) when they support every other sport," said Tiffany Payne, a member and co-organizer of MicroMania. "Because it's called midget wrestling instead of little people wrestling. We've known other people that have tried to do it that way and it just doesn't bring people in. People don't get excited about it."

"You know what to expect if you see the banner say or the poster say 'midget wrestling.' If the poster says 'little people wrestling', it just doesn't have that same effect," said promoter Billy Blade.

During the show, the experience is obvious. As trash cans, trash can lids, cookie sheets, chairs and even plungers are brought onto the ring, each of the wrestlers know how to take a fall.

It's not just diminutive wrestlers going against each other, however. Joining the group is Heidi Howitzer, who works with another division promoted by Blade; Battling Bombshells.

According to Little Fabio, events like the one held at the Bear Trap are the closest some people can get to seeing what professional wrestling is really like.

"They come for the midget wrestling and then that's kind of like their first exposure to professional wrestling as a whole," said Little Fabio.

While LPA may have issues with the term midget and midget wrestling, Little Fabio is one of those wrestlers that doesn't seem to mind it. He's not alone. Hornswoggle, a midget wrestler for WWE, has stated that he is proud of the term due to its history in the wrestling industry and prefers the usage for its marketability.

"There's never any hate behind it, so I don't mind it, but the word 'little person' in itself; it always made me feel like I was small or fragile or something. I'm okay with dwarf, I'm okay with midget," Little Fabio said. "I'm doing the exact same thing that the big guys are doing. I fell in love with the business, I wanted to start doing this and who says I shouldn't be able to do it just because of my size."

Throughout the event on Saturday night, which consisted of three matches and a battle royale, the height of the wrestlers appeared an afterthought. Dalton, Little Fabio, Teo, Payne and Heidi Howitzer all took their time in the ring and, like good theater should, played to their audience. The audience, for their part, knew when to boo and when to cheer.

Blade said, "At our shows, they go in and they might think of it as a comedy-which it is; it's comedy, wrestling, everything mixed into one-but what ends up happening is at the end of the show everybody goes home like they've seen the best thing they've ever seen." 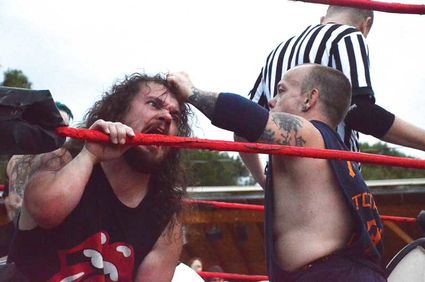