A jury of their (masked) peers

Jury trials to resume in Circuit Court and District Court in August, safety precautions to be in place 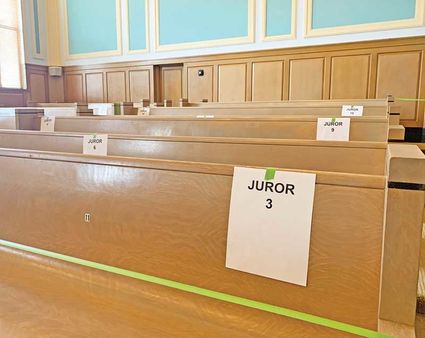 Benches traditionally used by the public will, for the forseeable future, be used as the jury box as both Carbon County District Court and Carbon County Circuit Court resume jury trials in August.

At the Carbon County Courthouse in Rawlins, both the District Court and Circuit Court have gone nearly five months without having a jury trial. That is about to change starting the first week in August as a backlog of criminal and civil cases approach their deadline.

"In Wyoming, there's a statutory right to a speedy trial within 180 days of the arraignment and we have run into the instance, because we have continued cases since March, now we're up on people who even charged in March are at their speedy trial deadline," said District Court Judge Dawnessa Snyder. "Because of times of great t...