Save the Saratoga Musuem 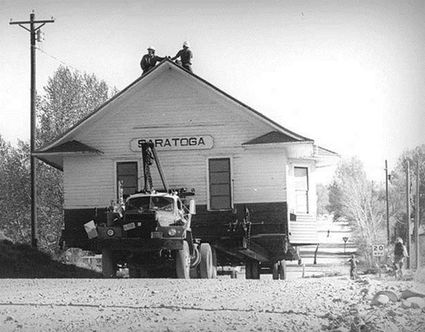 Workmen are shown moving the Saratoga depot from along the railroad tracks near the sawmill at the east end of Bridge Street to its present location east across Highway 130 from the airport in May of 1979. Funds for the move were received from hundreds of contributors. The structure now houses the Saratoga Museum and its extensive collection.

Establishing a local museum to preserve our rich history and heritage is hard, but not nearly as tough as maintaining one.

A bold statement, yet I feel I can back it up having help found and then maintain both the Saratoga and Grand Encampment Museums since the 1960s.

Both museums have been recipients of hundreds of photos, manuscripts, historical items, newspapers, printing presses, pamphlets, programs, treks and funds from the Bob Martin/Dick Perue collection. And yes, both have equally preserved and shared these donations.

At present the Saratoga Museum is fighting for its...