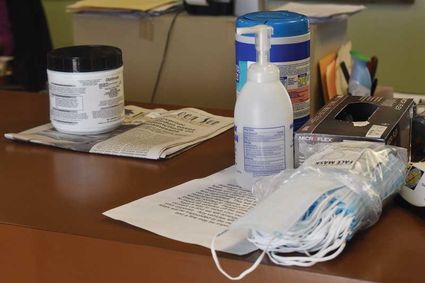 Masks, gloves, sanitizer and hand wipes are availble at the front counter at the Medicine Bow Town Hall that is open the public. Temperature scans are also done before business can be conducted.

Carbon County is slowly showing signs of coming out of the COVID-19 lockdown. The Town of Medicine Bow opened town hall to the public on May 12 after the town council voted on May 11 to do so.

It doesn't mean that going into the office is as it was before the closure to the public back in March.

Karen Heath said there has not been a major influx of customers since opening the past couple days.

"During the closing, we put in a mail slot for people to pay their bills, but there are some residents that only feel comfortable filling out their check at the counter in person," Heath said.

She said that, although there hasn't been much traffic, Heath likes being able to address residents' concerns in person.

"I'd rather deal with people in person than have to yell at them through the door, which happened quite a lot during the closure," Heath said. "Even on the phone, a problem can be harder to resolve sometimes because people aren't reading each other's body language."

The body language is a bit further away from Heath when she interacts now.

Before entering the town hall, there is a sign telling people to stay away if they are feeling unwell.

If a resident enters, their temperature is taken by thermometer that is hand held and can be taken from a distance. 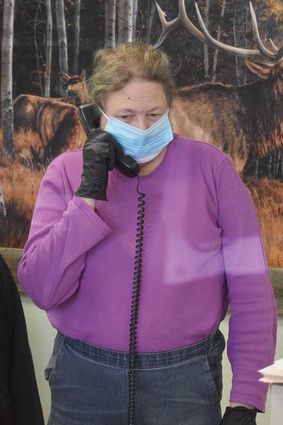 "We had to pay a hundred dollars for it because the ones that are more reasonable take three to four months to arrive," Mayor Sharon Biamon said. "Not only do we take temps of people first entering, all employees have their temps taken before starting work."

In addition to the temperature readings, masks, gloves and sanitizer are available at the counter.

Heath said she stands six feet away during her interactions with the people who enter the building.

She isn't concerned about facing the public. Heath feels that the residents are fairly responsible concerning exposing people to unnecessary risk.

"I like what our governor's stance was when this all started. He didn't do a total lockdown like some states," Heath said. "He said Wyoming people are smarter than to stand next to each other when a contagious disease is hitting the country. He pointed out Wyomingites have common sense."