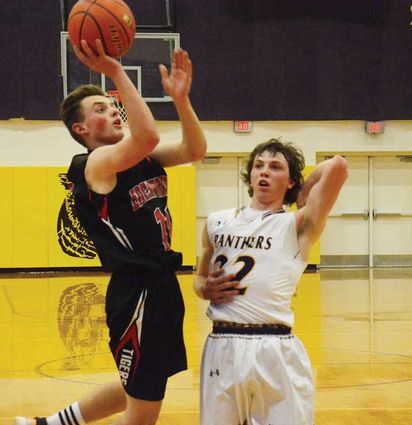 Reid Schroeder takes aim during the season to win best Southwest District Athlete of the Year.

Though both the school year and the spring sports season saw an abrupt end due to the novel coronavirus (COVID-19), that hasn't stopped accolades from being presented to senior student athletes. Recently, Encampment senior Reid Schroeder was one of 23 students who had been nominated to receive the Southwest District Senior Student Athletes of the Year.

In his time at Encampment K-12 School, Schroeder has played basketball, competed in cross country for Saratoga, competed in track and field, played soccer for the Rawlins Outlaws and played football for both Saratoga and Encampment.

According to a press release from the Southwest District Athletic Administrators, "Each year the best senior student athletes from Southwest Wyoming are nominated for this outstanding award. Athletes are nominated based on their athletic achievements, academic success and leadership in their school and community."

Schroeder is the only senior student from all of Carbon County School District No. 2 to be nominated for this award.

"Reid Schroeder is very deserving of this award," said Jake Johnston, head coach for Encampment Tiger basketball. "He is a high character young man that has represented our community and our school as well as one can. I know Reid will be successful in all facets of his life. Encampment K-12 will surely miss having him walk through our halls."

Kegan Willford, who has coached Schroeder in both football and track and field, had similar praise.

"Congratulations to Reid Schroeder for being chosen the Southwest District Athlete of the Year. Reid has put in the time and effort over his year both atheletically and academically in his time here at Encampment School," said Willford. "He has been a great leader. He leads by example and is very humble in accepting any individual recognition. He is extremely coachable and has a natural ability to pick-up on schemes and concepts. We wish him the best in college next year but will miss him here at Encampment School."

Following graduation, Schroeder plans on attending the University of Wyoming to pursue a Bachelors of Mathematics.