The Hanna Landfill closes for time being to get caught up 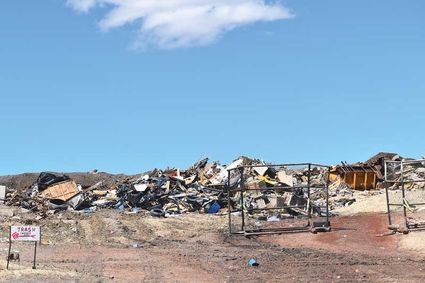 The landfill on the last day of being open to the public before the temporary closure starting last Saturday.

The High Country Joint Powers Board (HCJPB) met at 6 p.m. on Thursday at the Elk Mountain Town Hall complex.

In attendance, besides the board members were the mayors from Elk Mountain, Hanna, and Medicine Bow.

The minutes from the March 5 meeting were approved quickly as was the agenda. There had been no meeting in April. The financials were approved next.

The topic of focus was the condition of the Hanna landfill.

"On the landfill report, we got a DEQ (Department of Environmental Quality) violations, several of them," Toby Smith, chairman of the HCJPB said. "I have tried and tried to get those guys to do what they need to get done, and doesn't work. The smell that Lois Buchanan, mayor of Hanna, brought up; we aren't going to get away from. The onions and potatoes were buried into an area that has water and it stinks."

Smith said that dirt has to be put on the site. He said the dump truck needs to repaired and is not operational at the moment.

"My concern is that because they neglected putting layers of dirt where they should have to keep the smell under control ... it will have excessive settling that will jeopardize the closing of the landfill," Mayor of Elk Mountain Morgan Irene said. "The board may have to have more engineering and have unearth all the stinky stuff and properly relayer the dirt and rebury it all."

He suggested if the landfill didn't have the equipment, it would be wise to rent what was needed, so the situation did not deteriorate worse.

Hanna representative said that the landfill should be closed.

"My feeling is that we need to close the landfill and get dumpsters there to gather our garbage and then hire a contractor to get the job done," Patton said. "We are just getting further and further behind."

Irene said he had heard there the landfill had not met minimum contours needed to close the landfill by the slated permanent closing of July's deadline.

"Because if we stop putting debris into the landfill, it is going to mean we have to get more dirt," Irene said.

Putting rolloffs were mentioned as a solution.

Irene said he thought it was a good solution.

"If we use rolloffs, then we can provide trash service for Hanna, since Medicine Bow and Elk Mountain have this going already," Irene said. "Then it can all go to Laramie until we get this taken care of."

The violations from DEQ were excessive litter accumulation onsite and offsite. There were complaints of excessive odor offsite. Waste was not being properly covered.

Smith said the new April report acknowledged the situation was an improvement than the February report, more work had to be done to get up to code.

The report said the roads leading to the landfill area needed to be improved.

Smith said an engineer would be coming to evaluate what needed to be done.

Bids were still being taken for the dumpsters that will eventually be placed around the three towns.

The board said no transfer building will be built. The price is prohibitive and the dumpsters around town make it useless.

The board then went into executive session to discuss personnel at the landfill.

The next scheduled meeting will be at 6 p.m. on June 4 at Hanna Town Hall.